Leonardo has taken the wraps off the most advanced version of its M-346, with the fighter attack (FA) standard to be capable of performing combat duties and also serving in an aggressor role.
On show in the company’s static display, the M-346FA can carry an array of air-to-air and air-to-surface missiles and precision-guided bombs. Its maximum weapons load will be more than 2t spread across seven stores stations, Leonardo says. 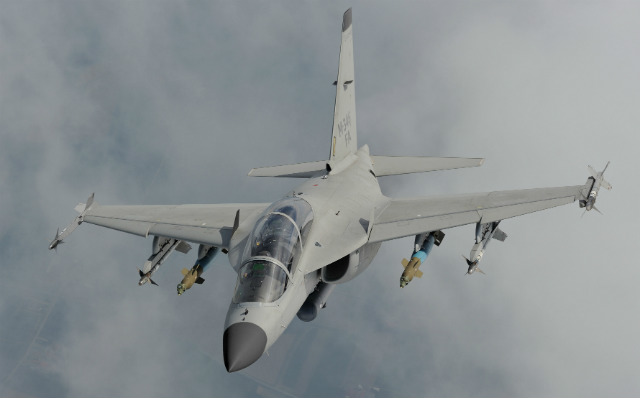 The aircraft also will be equipped with the company’s Grifo-346 radar and self-protection equipment, and a radar cross-section reduction kit featuring engine intake grids, a special coating for the canopy and radar-absorbent material on the wing leading edge can also be acquired.
“Armament is our core business – we are experts in this,” says Leonardo’s chief test pilot, Enrico Scarabotto, who describes the evolution as part of a family concept for the M-346; already in service as an advanced jet trainer with the air forces of Israel, Italy, Poland and Singapore.
The FA model also could provide aggressor training for air forces, with private companies which deliver such services described as being “enthusiastic” about the development.
“Many customers are interested,” Scarabotto says. “The aircraft has exceptional performance – with radar and self-defence it will be perfect.”
Also making its debut is Leonardo’s single-engined M-345 basic trainer. First flown last December and the subject of an initial five-aircraft order from the Italian air force, the type has also been selected by a second nation, says head of programme management Emanuele Merlo. The undisclosed buyer could sign a production order before year-end.
Powered by a Williams International FJ44-4M-34 engine, the jet is touted as offering greater training potential than high-end turboprops, but with similar acquisition and through-life costs. Rome early this year signed an initial order for aircraft to be used at its academy at Lecce air base from late 2019, with its current planned commitment being for 45 examples. 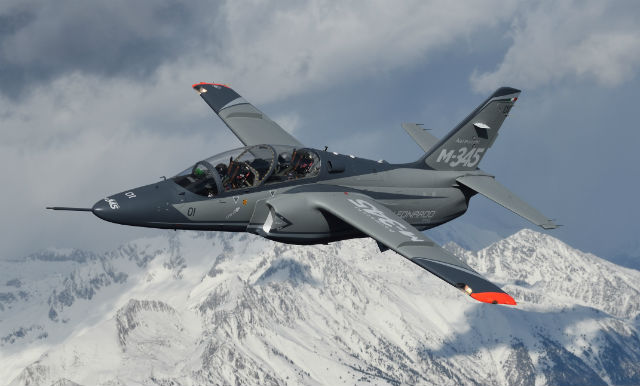 Merlo says the company is seeing interest in the new model from nations in Africa, Asia, Europe, Latin America and the Middle East – including with the United Arab Emirates.