AVIC has completed the forward fuselage for the first prototype of the AG600 amphibian aircraft at its Chengdu factory, and expects the type’s maiden flight in early 2016.

The forward fuselage section is 9.5m long and includes the cockpit and nose landing gear bay, says AVIC in a statement. It incorporates 5,200 separate parts.

The statement adds that the type received two firm orders at last year’s Airshow China in Zhuhai, but it does not specify the customer. A source has said that the first customer is likely to be the nation’s coast guard.

At the show, an AVIC representative told Flightglobal that the company does not expect to produce the AG600, previously labelled the TA-600, in large numbers. He also said the first flight would take place at the end of 2015, but it appears the company has backed away from this plan. 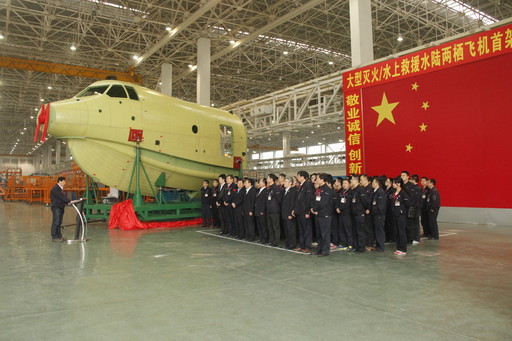 The forward fuselage section will be shipped to a China Aviation Industry General Aircraft (CAIGA) factory in Zhuhai, where it will be mated with other key structures. The wings are being produced in Xian, while the fuselage, tail, and other large components are being built in Hanzhong.

The company plans for the type to have a maximum take-off weight (MTOW) of 53,500kg from a paved runway or calm water. For choppy water, the MTOW will be 49,800kg.

Initially, there will be two variants, one optimised for the search and rescue (SAR) mission, the other for fire fighting. In the SAR mission, the AG600 will be able to carry 50 passengers.

In the fire fighting mission, the aircraft will be able to disgorge 12,000kg of water in a range between 12 to 20 seconds.

A Chinese-language publication distributed at the 2014 show suggests that AVIC is also considering missions such as surveillance and cargo.