Airbus confirms an A340-600 was damaged and five people were injured in a ground test accident at the company’s Saint-Martin site in .

The aircraft sustained damage when it somehow broke free of its parking chocks during engine run-ups around 5 pm, local time. News photos taken at the scene show the aircraft's nose rammed through a blast deflection wall.

“At this time, recovery operations are still in progress and Airbus staff is working closely with the emergency services and local authorities at the site,” an Airbus statement says. 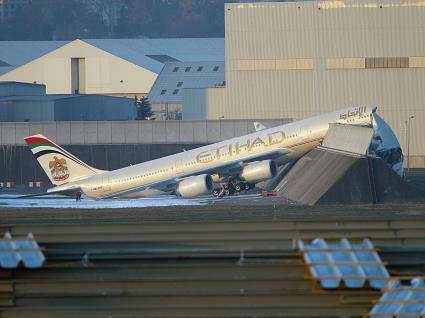 Nine people were aboard the aircraft at the time of the accident. The condition of the five injured person was not immediately available.

“Airbus expresses its sympathy to the families and friends of the [injured] persons concerned,” the company adds.