Eurofighter has delivered to the Italian air force its 500th Typhoon, 14 years after it handed over the first example to the UK Royal Air Force.

The aircraft will become operational at the end of April, following an acceptance flight by Eurofighter and a number of key assessments by the customer.

"The delivery of the 500th aircraft is a mark of the [programme's] team spirit," Volker Paltzo, chief executive of Eurofighter, said at a ceremony in Turin on 11 April, noting that its success reflects the strength of European industry. 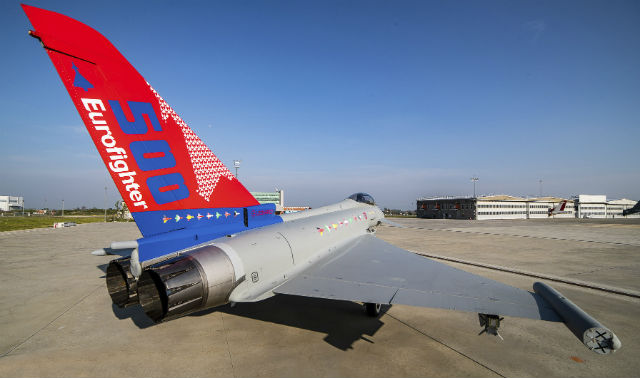 The Italian air force has ordered a total of 96 Typhoons, including 82 single-seat fighters and 14 twin-seat trainers. All but one of the trainers have been handed over to the service, and the aircraft delivered on 11 April was its 74th single-seater.

The Eurofighter consortium delivered its first Typhoon in 2003, and handed over its 100th production aircraft – also to the UK – three years later.

During the 11 April ceremony, Eurofighter also made a symbolic "delivery" to Kuwait. The Gulf nation will receive its first Typhoon in the coming years, and to represent this commitment Eurofighter handed over two titanium keels and a flaperon.

Kuwait has 28 examples on order, including six trainers, and is the newest customer for the type. Including the aircraft for Kuwait, there are 599 Typhoons on order – all expected to be delivered by 2023 according to the current production schedule.

Production is already running at a reduced rate in order to balance the final scheduled deliveries, but Paltzo is hoping for further sales to extend manufacturing.

Significantly, Kuwait will be the first nation to receive the active electronically scanned radar that is currently in development for the Eurofighter. It will receive its aircraft in the P3EB software standard, which also will introduce new weapons in the form of MBDA's Brimstone 2, Meteor and Storm Shadow.