Textron AirLand has completed the debut flight of its first production-conforming Scorpion, with the multi-mission platform having received numerous enhancements over its earlier prototype.

Conducted from McConnell AFB in Kansas on 22 December, the 1h 42min first flight “verified the avionics and aerodynamic performance, as well as a number of aircraft systems”, the Textron company says. Registered as N530TX, the jet “performed extremely well”, it adds. 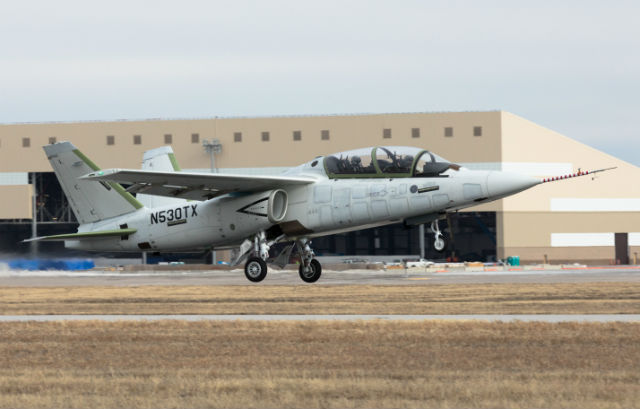 Design improvements introduced with the new aircraft include a simplified landing gear, enhanced aft horizontal stabiliser and an additional 4˚ of sweep to its wing.

Textron AirLand says the adaptations are the result of “target customer feedback, as well as results from an extensive flight test programme”. Its earlier prototype, N531TA, has amassed more than 800h of flight time since its debut in December 2013.

Previously displayed at air shows in Chile, France and the UK, the Scorpion is being promoted as “a tactical aircraft designed to excel in roles ranging from intelligence, surveillance and reconnaissance to close air support and armed reconnaissance”. In October 2016, the prototype completed initial firing trials with Hydra-70 unguided 2.75in rockets, BAE Systems’ Advanced Precision Kill Weapon System and Lockheed Martin’s AGM-114F Hellfire air-to-surface missile.

The production-conforming Scorpion will now enter a “robust flight test programme” supported by the US Air Force, Textron AirLand says. This will enable the manufacturer to seek certification of the design, despite the USAF having no programme of record to acquire it.