Mitsubishi Aircraft says the second prototype for its MRJ regional jet programme is undergoing engine tests, as it readies for its first flight.

In a newsletter, the Japanese manufacturer says FTA-2 will move forward with taxi tests in May, followed by flight tests.

This follows the completion of the first phase of flight tests for the FTA-1. On 13 April, FTA-1 started recieving “planned modifications” that will be completed in mid-May. It will also be fitted with instruments necessary for upcoming tests. 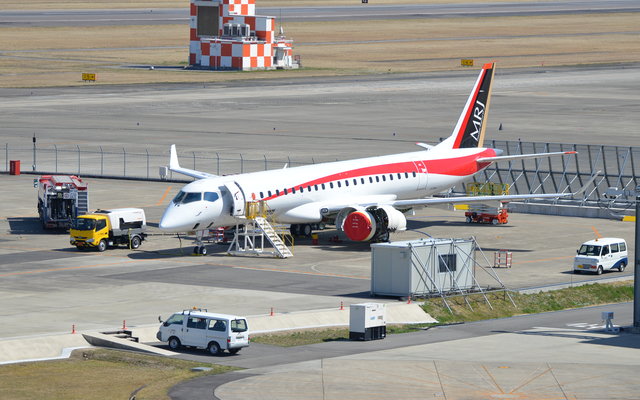 Mitsubishi says it has been conducting flight tests on FTA-1 on consecutive days since mid-March, whenever weather conditions permit. These tests include flying with only one engine, mid-air shut down and restart of engine and auxiliary power systems, as well as a functional check on the emergency power generation system.

“These tests are providing in-flight confirmation under actual flying conditions of the performance of various safety characteristics and emergency systems and procedures,” it adds.

On 31 March, a low-elevation flight was also conducted over the runway at Noto airport. The flight allowed the airframer to acquire data such as speed and altitude both from the ground and in the aircraft, for the correction of onboard instruments.

The MRJ is scheduled for first delivery in mid-2018. Mitsubishi is using five test aircraft for the flight campaign.