Aeroflot Group carrier Rossiya has taken delivery of a Boeing 747-400 bearing the revised and modernised livery of the newly-consolidated carrier.

Rossiya’s aircraft arrived from repainting in Dublin. The airline is expanding its fleet with aircraft formerly operated by Transaero before its collapse last year.

The airline says that, as part of the revamp, aircraft will carry the names of Russian cities – the first 747 will be “naturally” named after the carrier’s St Petersburg base.

Flightglobal's Fleets Analyzer database shows the aircraft (EI-XLE) is a General Electric CF6-powered airframe, produced in 1999, which was originally delivered to Japan Airlines before being transferred to Transaero.

Rossiya’s operation is being reinforced with the integration of Aeroflot Group carriers Orenair and Donavia.

The new livery is based on an aircraft contrail, with elements resembling turbine blades, and the titles are designed to reflect the “dynamic character” of the brand, says the carrier.

Rossiya chairman Vadim Zingman says the colour scheme will give the impression of movement and flight even when the aircraft is on the ground. Repainting of the rest of the fleet will be carried out in accordance with planned maintenance schedules. 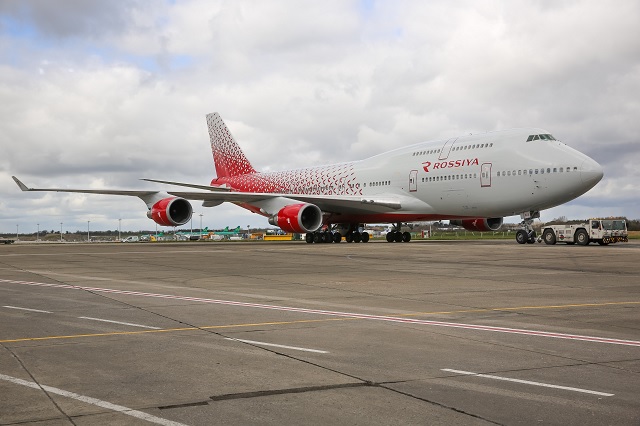