Airbus has formally handed over a Singapore Airlines A350-900 which marks the completion of 10,000 aircraft deliveries for the European manufacturer.

The ceremony took place at the airframer’s headquarters in Toulouse on 14 October.

Singapore Airlines’ latest aircraft, MSN54, is one of 67 Rolls-Royce Trent XWB-powered A350s ordered by the carrier. It will take the airline’s fleet of the type to six.

SIA intends to conduct a ferry flight with the aircraft – which features a ’10,000th Airbus’ logo in gold on its aft fuselage – on 15 October, with a view to using the jet on its inaugural service to San Francisco on 23 October. 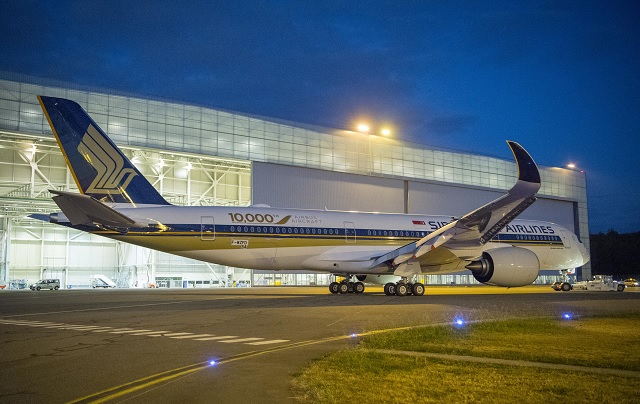 Speaking during the ceremony, Airbus Group chief Tom Enders said the company was “honoured and proud” to supply the landmark A350 to a “long-standing partner”.

He adds that there could be “no better endorsement” of its aircraft than SIA’s operation of a wide number of Airbus types over the years.

“It shows how far Airbus has come over the decades.”

Airbus notched up 10,000 deliveries 42 years after it began delivering its first aircraft, the A300, in 1974, a year in which the airframer handed over 20 of the type.

Enders referred to the early days of Airbus production, stating that, at times, the company was manufacturing “just over half an aircraft per month”.

He underlines the subsequent advances in such areas as safety, efficiency and connectivity, adding: “I think the A350 gives a strong indication of what our next 10,000 aircraft will be.”

The first Airbus delivered to SIA was an A300B4, MSN117, which was introduced to the carrier in January 1981.

Singapore Airlines is also a launch customer for the ultra long-range A350-900ULR, which will be put on the routes to New York and Los Angeles from 2018. The airline is taking seven of this variant.