US military air accident investigators have concluded that pilot and flight engineer error was the cause of the crash of a US Air Force Lockheed C-5 Galaxy in early April in Dover AFB in Delaware.

The Air Mobility Command accident investigation board found that human error caused the crash despite an experienced aircrew having more than 10,000h flying time at the controls. The two pilots were Capt Brian LaFreda and Lt Col Harland Nelson, with Lt Col Robert Moorman in a jump seat behind them and two flight engineers. The report states that the crew “did not properly configure, manoeuvre and power the aircraft during approach and landing.”

The report goes on to say that following a normal take-off and initial climb from Dover AFB, a ‘Thrust Reverser Not Locked’ indicator light came on for the No 2 engine, leading the crew to shut down the engine and return to base.  During the return, the report finds that the pilots and flight engineers accidentally powered-up No 2 engine’s throttle rather than fully-operational No 3 engine, which was left in idle.

The pilots then used wrong flap settings and the wrong approach methods for the aircraft, which was carrying almost 50t of supplies for troops in Iraq and was bound for Ramstein USAF base in Germany. The C-5 had a total all-up weight of 330,000kg (730,000lb), around 4,500kg heavier than usual landing weight and requring special landing procedures.

The crew used a full flap approach instead of settings recommended of around 40-60%, which would have lessened drag . The errors led to too much drag and caused a collision with a telegraph pole and the subsequent crash snapped the aircraft into two parts when it landed in a field around 2km (1mile) short of the runway (pictured below). 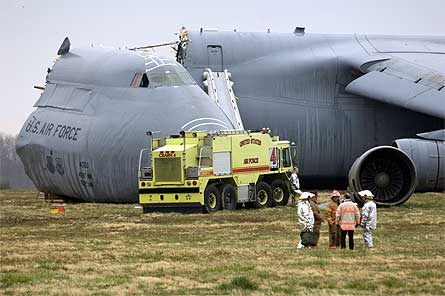 None of the crew has flown since the crash, although another military board will investigate the conduct of the pilots, who have been accused of “a lack of situational awareness and complacency, " by Col Ray Torres, head of the accident investigation board.

The report goes on to say that the flight instructor and primary flight engineers failed to brief on proper flap settings, leaving pilots unable to set flap settings.

Finally, the aircraft commander “failed to give a complete approach briefing that would have included non-standard factors, configuration, landing distance and missed approach intentions” for the pilots’ attempt at a visual approach well below a normal glidepath for an instrument-aided approach.