Southwest Airlines has unveiled a new livery and branding, months ahead of the completion of its integration with AirTran Airways.

The carrier revealed the new livery in a hangar event in Dallas today attended by hundreds of Southwest employees.

Southwest chief executive Gary Kelly says the new branding is the “exclamation point” to a year of changes for the carrier. “We thought it was time for a new visual expression of our brand – one that marries our past to our present and sets the course for where we’re headed in the future,” he says.

The airline has not said how much it is spending on the rebranding, but says in a document distributed to press that it will use a “phased rollout” to spread the costs over time.

Southwest operates a fleet of 631 Boeing 737s, Flightglobal’s Ascend Fleets database shows. The airline was in the process of repainting subsidiary AirTran’s 737s as the two airlines were being merged, but it says it had suspended re-painting this year in anticipation of the new livery. New 737s will be delivered to the airline in the new livery. The carrier has 285 737s on order, Ascend shows.

Southwest anticipates that it will take seven years to implement the new branding across its aircraft, airports and other customer-facing infrastructure. It also plans to redesign its staff uniforms.

Aircraft interiors are slated to undergo changes as well, and work will start by end-2015, says the carrier. The airline is "researching potential updates to our seats" and plans to replace its existing winged heart logos in its aircraft interiors with the new heart logo in its new branding.

The carrier says it began studying a rebranding in early 2013, and secured executive approval in January 2014. Southwest is on track to phasing out the AirTran brand by end-2014. 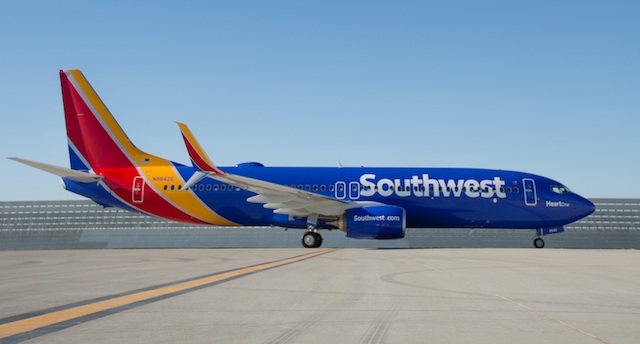