A Tara Air Viking Twin Otter DHC-6-300 was damaged in a runway excursion at Simikot airport on 28 November.

A tweet from private Nepali carrier Yeti Airlines says the incident occurred at 09:40 local time. It also listed all 13 passengers and the three crew members on board as "safe". However, they have been taken to a local hospital for "further precautionary medical assessment".

Local media reports attribute the accident to a blown tire during take off, and that the aircraft collided with an obstacle before coming to a stop.

Images on social media show that the aircraft is registered 9N-ABM (MSN 455). The aircraft is seen resting on its fuselage, with extensive damage to its nose. Its landing gear also buckled. 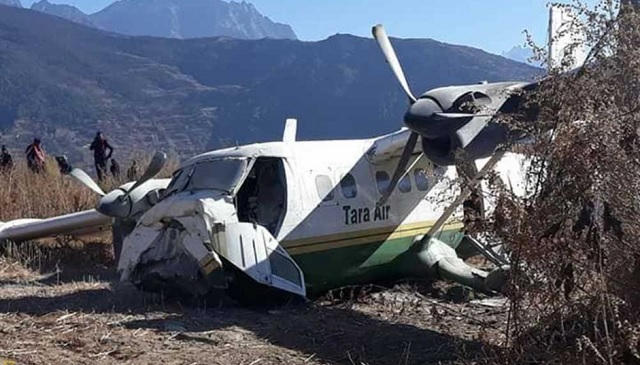 Flight Fleets Analyzer shows that 9N-ABM was built in 1975 and is owned by Nepal Airlines.

Simikot airport is located in Nepal's Northwestern district of Humla.