Boeing today opened its 787 factory at its Everett plant in the US and began final assembly of its first example of the aircraft.

The assembly is taking place in a bay of an early 1990s hangar, which was initially slated for a second 777 line. But, sitting alongside the existing 777 line, the bay has been freed up through lean manufacturing techniques.

The nose and mid-body of the first aircraft stand in position, ready for alignment, drilling and joining. Other major assemblies are in a pre-integration area, ready to be moved into place. 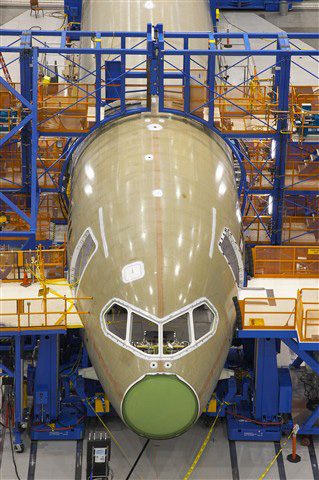 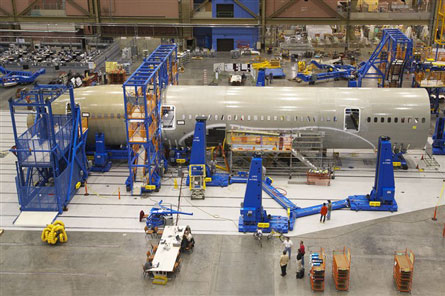 Boeing’s vice-president of 787 development and production, Scott Strode, says the factory opening is “a very important milestone” in the 787 programme.

“Today we begin assembling the first airplane of a new generation. The 787 not only will revolutionise air travel, it represents a new way of building airplanes,” he says.

There are four positions on the 787 lean manufacturing line, although only three will be used initially. The 787 is Boeing’s first aircraft to be produced in a nose-to-tail alignment from day one. 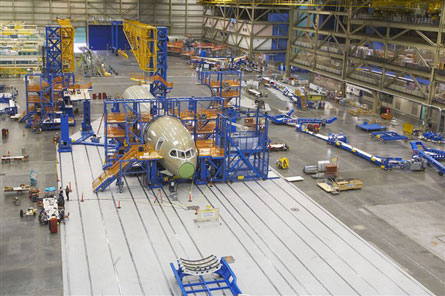 Boeing is planning to reach a six-day completion rate, but ultimately plans to cut this to just three days. Initial manufacturing will be done on a ‘pulse’ basis, although it has the potential to become a moving line like the 737 and 777 setup.

The first aircraft will take about seven weeks to assemble. Boeing is planning the roll-out of the first of six test aircraft on 8 July (07.08.07 in US date format). A further two, non-flying static and fatigue test aircraft are also due for production.

“Using composites on the 787 airframe has a number of manufacturing advantages. We are able to build huge structure in just one piece, which means we essentially have six major end items coming together in final assembly – the forward, centre and aft fuselage sections, the wings, the horizontal stabiliser and the vertical fin.”

These large assemblies avoid the use of traditional monument assembly tools, which can be replaced with portable tools. No overhead cranes are used to move the aircraft structures.

Boeing has accrued 568 firm 787 orders from 44 airlines, which it claims makes the 787 the fastest-selling new aircraft.

The first 787 is due for delivery next year to All Nippon Airways (ANA).