By Max Kingsley-Jones in Toulouse

Airbus has unveiled a novel “super first class” concept on its revamped A380 cabin mock-up in Toulouse which could debut on the aircraft with some of the early operators.

The forward upper deck features three completely enclosed suites down each side, with a large aisle that is occupied by two sofas and tables (pictured below). Each suite contains a reclining chair and sofa – the latter doubling up as a bed.

The suites have a sliding doors and are large enough to accommodate several people. They are sized so that the could be installed in a three abreast configuration on the upper deck of an A380 or the main deck of other Airbus widebodies. The side panel does not rise to the top of the cabin roof panel to ensure that the air circulation system can still function satisfactorily. 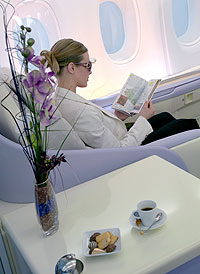 “This concept is designed to be able to be put into production,” says A380 senior marketing analyst Corrin Higgs, who does not rule out the possibility that something similar could be seen on the A380s of one of the early customers, which include Singapore Airlines, Emirates and Qantas.

The forward section of the upper deck adjacent to the staircase is also utilised, with a break-out zone (pictured above) featuring a sofa on one side and a “kingsize bathroom” on the other which could incorporate a shower unit.

Downstairs in the forward section of the main deck is what Higgs calls a “business class of the future” design incorporating pod-type lie-flat seats in a six abreast configuration (pictured below and left).

Last week flightglobal.com brought you the previously-unseen computer-generated walk-through of what the first A380 corporate jet could look like.