Malaysia Airlines (MAS) has taken delivery of its first Boeing 737-800 with the airframer's new Sky Interior.

The aircraft, with MAS' new livery, landed in Subang today after a three-day multi-leg journey that began from Boeing Field in Seattle on 29 October.

It is the first of up to 55 737-800s that MAS has ordered. The airline is the first full-service carrier to operate the aircraft with the new interior.

Low-cost carrier FlyDubai was the first airline to take delivery of the aircraft with the new interior late last month.

Boeing's new interior is part of a package of improvements to the 737 family, which include a 2% fuel burn improvement and the updated CFM56-7BE engine.

The 160-seater aircraft will fly from Kuala Lumpur to Kota Kinabalu on 15 November, followed by its first commercial flight from Kota Kinabalu to Tokyo Haneda on the same day, says the airline.

MAS' new 737 is painted in the carrier's new livery in the airline's corporate colours of red and blue. It expects to receive two more 737-800s this year. 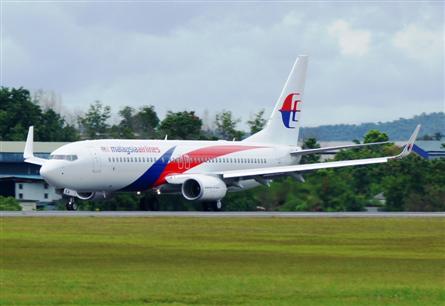