Unveiled today in computer-generated form, the new livery will appear on the first Qatar Airways aircraft next week – an Airbus A340-600 which is undergoing painting in Toulouse. The repainting of the airline’s fleet of over 40 aircraft is expected to take at least a year.


The new-look sees the tail fin painted with an image of the Oryx, national animal of the State of Qatar, significantly increased in size from the current tail design. In addition, the word ‘QATAR’ has been emblazoned in large bold burgundy letters across the forward end of the fuselage on both sides of the aircraft. The word ‘Al Qataria’ is inscribed in Arabic and light grey colour next to it. Another addition is Qatar Airways’ Oryx logo on the belly of the A340-600, as well as on the winglets. 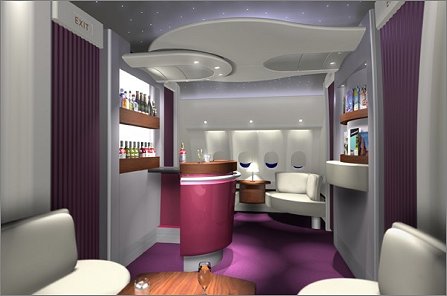 The airline’s new A340-600 fleet – delivery of which is due to begin later this year - will also be equipped with the dedicated first class lounge which is being showcased at ITB.

Features include a stand-up bar with drinks rack and spotlight mood lighting, and cream leather sofas that can seat up to six passengers.

“We cannot rest on our laurels which is why we are taking significant steps forward in both our image and product offering. This is the first livery change since Qatar Airways’ relaunch in 1997,” says Qatar Airways chief executive Akbar Al Baker.
“Over the next few weeks and months, we will be unveiling further details of our onboard product on the A340-600 and I promise they will be revolutionary in design and style.”

Qatar Airways flies to 69 destinations across Europe, Middle East, Africa, Indian subcontinent and East Asia from its operational hub of Doha. The airline will launch daily flights between Doha and Hong Kong on 26 March.

Blog:
Murdo Morrison writes from ITB Berlin about why Qatar Airways thinks its new cabin will give it the edge in the competitive Gulf market