Pilatus's PC-24 business jet will make its international show debut on 24 May, when the first test aircraft – P01 – makes a brief appearance on the static display at the European Business Aviation Convention and Exhibition at Geneva.

The first public outing for the twinjet (HB-VXA) comes three years after the seven-seat PC-24 – dubbed a “super versatile jet” by the Swiss manufacturer because of its short-runway performance and ability to land on unpaved strips – was unveiled at the Geneva event. The Williams International FJ44-4A-powered PC-24 is the Swiss manufacturer's first jet-powered aircraft.

P01 made its maiden sortie in May 2015 and, along with the second prototype (HB-VXB) – which joined the fleet in November – the flight-test campaign has accumulated over 400h, says Pilatus. 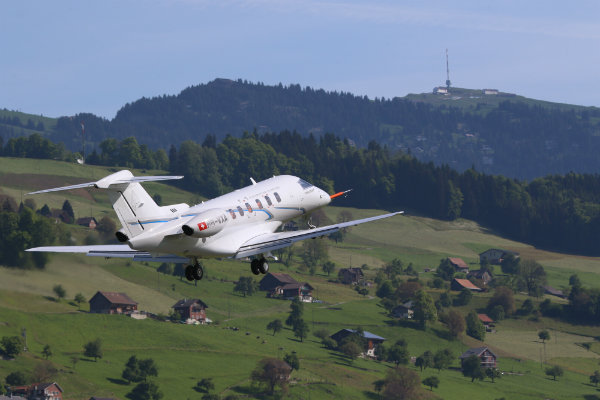 Three PC-24 prototypes will be used for the certification effort, and Pilatus says P03 will join the programme this year.

Certification and service entry of the 1,950nm (3,610km)-range aircraft are scheduled for 2017, with US operator PlaneSense the launch customer for the clean-sheet design.

The Portsmouth, New Hampshire-based fractional ownership company has an order for six PC-24s, and is also the world’s largest commercial operator of the PC-12NG single-engined turboprop, with a fleet of 34.

Pilatus says the first two years of production – 82 aircraft – is sold out. It plans to reopen the orderbook in late 2019 or early 2020.

The airframer says it will also display at EBACE a full-scale mock-up of the PC-24 with a new BMW Designworks interior.