Roger Beteille viewed the decision whether Airbus Industrie should launch the A320 as a simple one: “We just had to do it,” he told Flight International in 1984.

For the highly regarded engineer then in the twilight of a distinguished aerospace career, the A320 was his ultimate creation and followed a series of impressive achievements. Spearheading a still-adolescent Airbus, the A320 would be Europe’s final roll of the dice to establish a civil aircraft industry in Europe. What Beteille and his team of aerospace pioneers created was an all-new airliner bristling with technology on a mission to usurp Boeing and McDonnell Douglas in the mass-market, single-aisle sector.

“Perhaps we were too bold – we had no choice. Either we were going to be first with new technologies or we could not expect to be in the market,” Beteille told Flight in 1997, when recalling how the single-aisle family had come about.

By the time the A320 arrived in 1988, Airbus – led by Beteille – had already established its widebody A300/A310 family, but it was really the single-aisle twinjet that earned Toulouse the right to play on the global stage. Airbus recognised the key role Beteille played in its creation by naming the A350 final assembly line after him, which was inaugurated in 2012.

Roger Beteille was born in Aveyron in Southern France on 28 August 1921. After studying at Supaero in Toulouse, he joined Sud Aviation’s predecessor SNCASE in 1943. He gained his pilot’s licence in 1945 and quickly moved up the ranks to become head of flight testing by 1952.

On 27 May 1955, Beteille was one of the four crewmembers aboard the first flight of the SE.210 Caravelle. This short-haul twinjet enjoyed relatively strong sales in its early years, but Beteille felt that decisions taken about a tie-up with Douglas Aircraft stopped it achieving its true potential.

“The crucial mistake was to reject Douglas’s suggestion to change the fuselage section, to give convenient room for luggage,” he said. “I am personally convinced that Douglas would have maintained the initial co-operation with Sud if the modification necessary in their view to make Caravelle ‘more saleable’ in the USA had been accepted.”

With the Caravelle’s chance spent, by the mid-1960s Beteille’s passion to ensure Europe had a seat at the table in civil manufacturing focused on embryonic plans among British, French and German companies to jointly produce a short-haul widebody twin.

By early 1968 work was gathering pace on what would become the 250-seat Airbus A300B. But a crucial decision was around the width of the fuselage. Perhaps with the Caravelle experience fresh in his mind, Beteille identified the need to establish a diameter able to accommodate standard LD3 containers while still providing plenty of width for passengers.

“The problem was that, for a given size of aircraft, there is always a technically optimum fuselage diameter,” Beteille told Flight in 1997. “In the end, we settled on the minimum diameter compatible with the lightest aircraft possible."

With some slight tweaks to ensure that LD3s fitted under the cabin floor, Beteille created Airbus’s trademark “222in” cross-section which was ultimately adopted for all the manufacturer’s (single-deck) widebodies up until the A350, and continues into the future with the A330neo.

Beteille, who became known as “the man with the white tie” because of his snazzy dress sense, worked with production director Felix Kracht to create the workshare plan for the Airbus production system. This was all part of the original four-nation partnership that formed the foundation for Airbus’s early success.

Reflecting in 1981 on the virtues this structure brings, Beteille said: “Each partner has two duties at Airbus. He carries out his own work, and also takes part in what the others are doing. There is a constant cross-fertilisation of ideas.”

Beteille became Airbus general manager in 1975. While there was early success in Europe, to gain a global reputation it had crack the North American market. After building a rapport with Eastern Airlines boss Frank Borman – a fellow engineer and most notably the Apollo 8 commander – Beteille secured a deal to supply the iconic US carrier with 23 A300s.

“I suggested he try out the A300, pay for a 170-seat aircraft then settle the rest if he won more passengers,” explained Beteille. “Our gamble paid off. Overnight, we gained credibility.”

Beteille said the crucial Eastern signing was the turning point at which he said to himself: “Airbus will succeed.” 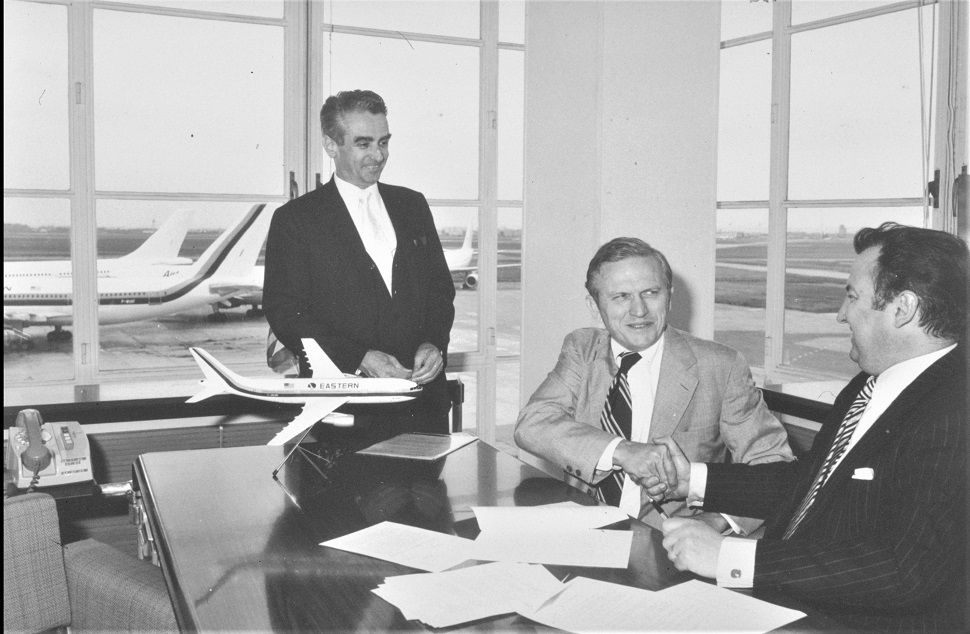 As he approached retirement, Beteille finally realised his dream of creating an aircraft family, with the launch of the A320 in 1984. “I was convinced that Airbus would never take off with a single aircraft,” he said.

The bold decision to equip the twinjet with an advanced cockpit, sidesticks and fly-by-wire controls set Airbus on to a trajectory that established it as a genuine player across all sectors of the air-transport industry.

That achievement was good not just for Europe’s aerospace industry but for the wider world, said Beteille: “If the civil airliner market had been left to evolve from the position it had reached in the late 1960s, then one monopolistic supplier would now dominate – which would have been bad for the airlines and bad for air travellers.”

When Beteille retired as company president in 1985, chairman Franz-Josef Strauss described him as “the father of Airbus”. He handed over the reins to former Aerospatiale executive Jean Pierson, who would carry Beteille’s legacy forward with great aplomb.