While locking hinged wing-tips – such as those on the new Boeing 777X – are designed to reconcile high aspect ratio wings with the constraints of airport gates, the AlbatrossOne demonstrator is designed to examine the advantages of allowing them to continue moving during flight.

AlbatrossOne is named for the gliding marine bird which travels long distances using wings which lock at the bird’s shoulder for dynamic soaring but which unlock when required for propulsion, manoeuvring or turbulence response.

The aircraft model, resembling an A321, features analogous hinges allowing the outer 25% of the wing to move freely.

Airbus says the semi-aeroelastic hinge concept – neither purely active nor purely passive – centres on a lock which would permit the sudden release in response to a gust.

Executive vice-president of engineering Jean-Brice Dumont, speaking at the airframer’s Innovation Days event in Toulouse, said the AlbatrossOne project “shows how nature can inspire us”.

The albatross has an aspect ratio of up to 18:1, around twice that of the A321. Greater span reduces induced drag, which represents a high proportion of overall drag.

First test flights with AlbatrossOne were conducted in the last few weeks, he says. The model was developed over 20 months by Airbus’s UK facility in Filton – the airframer describes it as the “first Filton aircraft since Concorde”.

It has been constructed from materials including carbonfibre and glassfibre reinforce polymers, as well as components from additive layer manufacturing, and plywood.

Dumont says that, during a wind gust, the wing of a conventional aircraft transmits high levels of load to the fuselage, which requires the wing box to be heavily reinforced.

But detecting the gust and allowing the wing-tip to flex alleviates these loads and means the wing structure can be considerably lighter.

Dumont acknowledges that the hinged wing-tip “adds complexity” but believes the potential lighter structures and fuel savings would outweigh this disadvantage.

Airbus already uses load-alleviation strategies on its aircraft through the activation of ailerons and spoilers.

Initial flights of AlbatrossOne have focused on the stability of the aircraft with the wing-tips locked and completely unlocked, to check there are no adverse effects.

Dumont says the next step is to conduct further tests to combine the two modes, allowing the wing-tips to unlock during flight and to examine the transition.

Future development would require an actuator to be fitted in order for the aircraft to revert to locked wings, and to allow the wing-tips to fold during gate docking.

Dumont says the research will look at the optimum size of the hinged portion. He indicates that Airbus would eventually work towards a full-size demonstrator, but stresses that such a development is several years away.

“The technologies are basically available,” he says. “The question is how they match on board an aircraft.”

Airbus revealed in a research paper last October that it was modelling the behaviour of semi-aeroelastic wing-tips to study whether the tips – if left unlocked – could contact the ground during landing.

Preliminary conclusions from the modelling, based on a short-range aircraft with a 45m span and 4.5m folding tips, indicate that aerodynamic stiffness and damping effects would prevent ground contact across a variety of scenarios for descent rate, bouncing, and rolling.

“There may be cases where contact is possible,” says the paper. “However, even in such a scenario this study suggests that countermeasures such as stoppers would likely not have to be very substantial.”

Analysis is also being undertaken as to whether the wing-tips could exhibit life limit oscillations, although the paper states that the AlbatrossOne test aircraft has been designed with a stiff wing to avoid wing-tip flapping and wing-bend coupling. 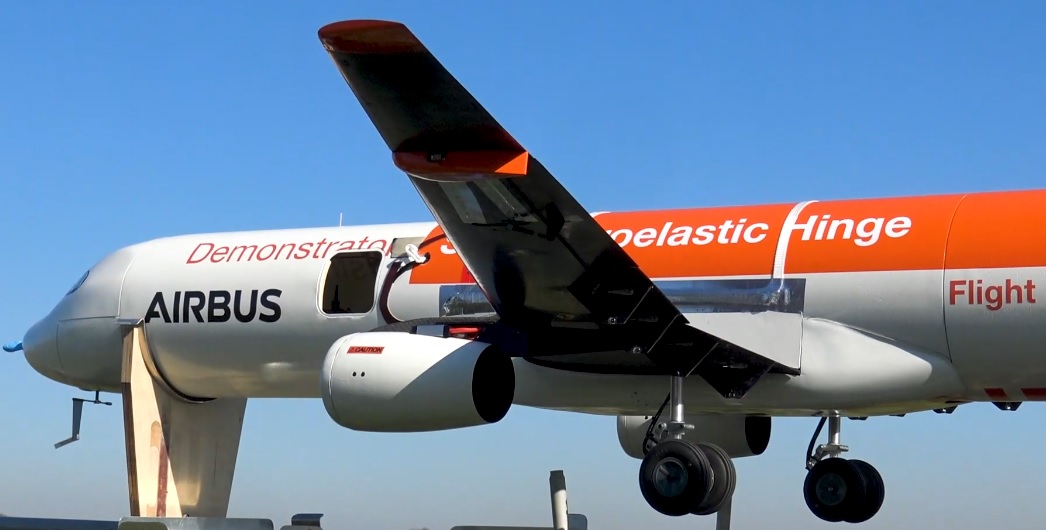