The UK Royal Air Force has moved one step closer to receiving its first Airbus Defence & Space A400M Atlas airlifter, after the aircraft successfully completed its maiden flight in Spain on 30 August. 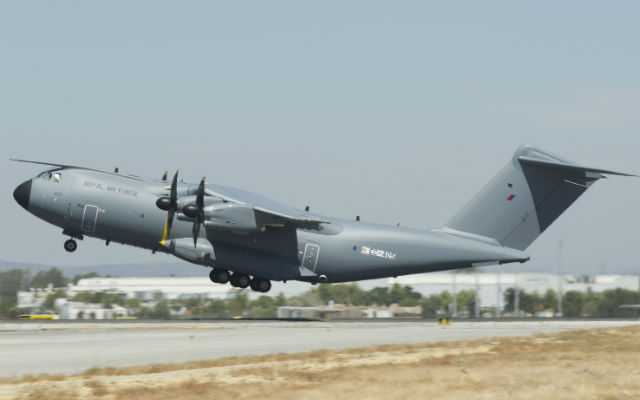 “It was very satisfying to conduct this first flight of the first A400M for the Royal Air Force,” Strongman says. “I have no doubt its combination of true tactical capability with strategic range will be an enormous contributor to future air mobility in the RAF.”

The RAF has 22 A400Ms on order, with the first expected to be available for delivery by the end of September, Airbus says. Four examples are expected to be handed over this year, with the last accepted in mid-2018. The UK’s Atlas fleet will be based at RAF Brize Norton in Oxfordshire.

At the end of August, Airbus announced an air-to-air refuelling test campaign using a Boeing F/A-18 Hornet had proven the capability of the A400M to act as an in-flight refuelling tanker.

The A400M has a basic fuel capacity of 50.8t, and in its standard configuration has refuelling provisions. However, this capacity can be increased using extra cargo hold tanks, so the aircraft can be used as a tanker.