Republic Airways has reached an agreement with Nordic Aviation Capital (NAC) to return 27 Bombardier Q400s to the lessor.

The agreement would allow the Indianapolis-based carrier to cancel its leases for the aircraft and return them to NAC within 60 days of the bankruptcy court approving the motion, a filing on 24 March shows.

“This agreement eliminates Republic’s obligations under the out of favour Q400 leases,” the airline says.

Republic is in the midst of removing all of its small regional jets and Q400s, and focusing its fleet around the Embraer 170 and 175 as part of its Chapter 11 bankruptcy restructuring.

The 27 aircraft include 24 that Republic has subleased to Flybe and three parked aircraft. NAC would assume the Flybe subleases under the agreement. 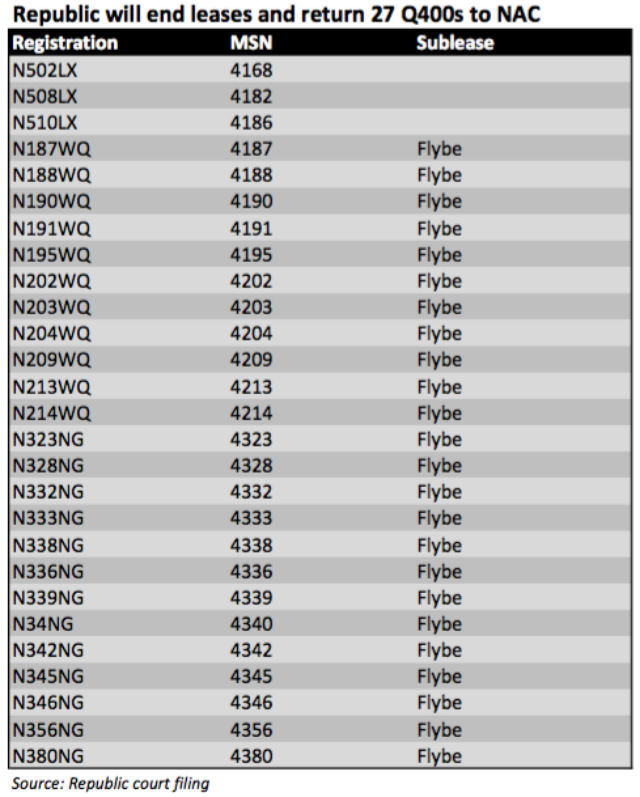 Republic says it plans to end all Q400 flying for United Airlines by 1 April.

In addition to returning the 27 aircraft, the agreement allows NAC to file an administrative claim of $374,000 and an unsecured claim for rejection of the leases of $47.9 million in Republic’s Chapter 11 proceedings.

Separately, Republic is seeking court authority to reject leases for four Embraer ERJ-145s with Dougherty Air Trustee, a filing on 24 March shows. Three of the aircraft (MSNs 145426, 145440 and 145444) are leased to Aeromexico Connect operator Aeroliteral and one (MSN 145241) is parked.

Republic says there is $5.9 million in debt outstanding against the four aircraft. Lease payments for the three aircraft at Aeroliteral do not cover debt service, it says.

A hearing on the separate plans to surrender aircraft is scheduled for 14 April in New York.