The Eurofighter Typhoon is poised to enter a fresh round of advanced weapons testing in the UK, just as the programme’s four partner nations have agreed a new long-term plan to pursue additional future capability enhancements for the multi-role type.

BAE Systems will conduct additional firings of the MBDA Meteor beyond visual-range air-to-air missile from August, while Alenia Aermacchi will perform separation trials with the Storm Shadow cruise missile in September or October. BAE also will fly a developmental active electronically scanned array radar with the Typhoon during the third quarter.

These precision-guided weapons, along with the Brimstone 2 air-to-surface missile now being integrated for the UK, will “significantly enhance Typhoon”, says MBDA UK managing director Dave Armstrong. The combination will be introduced by the Royal Air Force by December 2018, as part of a capability enhancement process dubbed Project Centurion (configuration pictured below on full-scale replica). 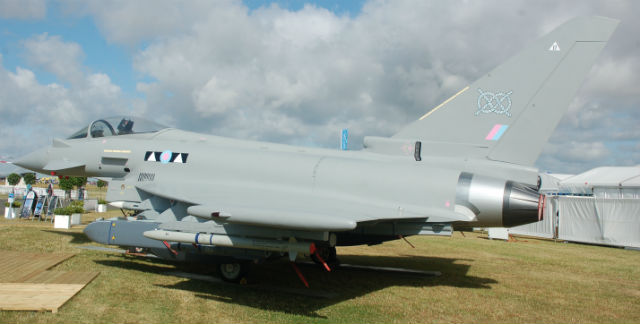 In the meantime, newly built Tranche 3 aircraft are being placed into storage, to save airframe life prior to receiving the modifications. Flightglobal’s Ascend Fleets database indicates that around 13 of the advanced model have been completed so far for the UK.

“The upgrades on the jet have been getting quicker, and cheaper,” says Chris Boardman, managing director of BAE’s Military Air & Information business unit. Speaking at the Royal International Air Tattoo (RIAT) at RAF Fairford in Gloucestershire on 17 July, he added: “It takes half the time than in 2010.”

Some 436 of a contracted 571 Eurofighters have now been delivered to customer nations, also including Austria and Saudi Arabia (and with Oman yet to introduce the type). This total includes 129 of an eventual 160 for the UK.

Noting that current commitments will sustain manufacturing until late 2017 or early 2018, Boardman says: “We need to get orders, or we won’t have a production programme.” But, realising that “international customers will place orders when they are ready – not according to our production continuity”, he adds that the Eurofighter partner companies have adapted “to build at low rate and maintain cost”. The latter has already been reduced by 20%.

The potential for a production gap is being considered, with Boardman noting that BAE completed a final batch of Panavia Tornados for Saudi Arabia three years after ending its programme for Germany, Italy and the UK, and “for a lower cost”.

Also speaking at the show, Phillip Dunne, minister of state for defence procurement, revealed that his counterparts from Germany, Italy and Spain have “agreed a forward capability roadmap for the next 10 years” for the Eurofighter. Finalised during a recent meeting held in Barcelona, this involves their backing a “UK-defined plan”.

“Where requirements do not cross, each nation has the possibility to go its own way,” says Air Marshal Simon Bollom, the RAF’s chief of air materiel.

Meanwhile, the service’s deputy commander capability, Air Marshal Baz North, says there will be “absolutely no gap in capability” when its last Tornado GR4s are retired – an event expected during 2019.

“We have a Strategic Defence and Security Review that sits before us, and we are looking at things within our combat air mass,” he adds. Typhoons are planned to represent 75% of this, along with the Lockheed Martin F-35B Lightning II.

Grp Capt Jez Attridge, station commander at the Typhoon’s main operating base – RAF Coningsby in Lincolnshire – adds: “Over the past 10 months we’ve really flexed our muscle to show what it can do.” In addition to performing an increased number of quick reaction alert sorties in the UK, defending the Falkland Islands and participating in NATO’s Baltic Air Policing mission in Estonia, this has included sending aircraft to exercises in Malaysia, Oman, Turkey, the United Arab Emirates and the USA. The service currently has five operational Typhoon squadrons at Coningsby and Lossiemouth, in Scotland, with a sixth to stand up later this year.

The Typhoon’s combat capabilities are also “being proven every day by the Royal Saudi Air Force in operation Decisive Storm”, says Attridge.