Turkish weapons manufacturer Roketsan has revealed the development of a lightweight missile system that could be integrated onto small unmanned air vehicles (UAVs).

Unveiled at the IDEF exhibition in Istanbul, the Yatagan is a 40mm laser-guided miniature missile. This can be fired from a grenade launcher mounted on an assault rifle, but imagery shown by the company also points to the munition’s possible integration on small quadcopters. 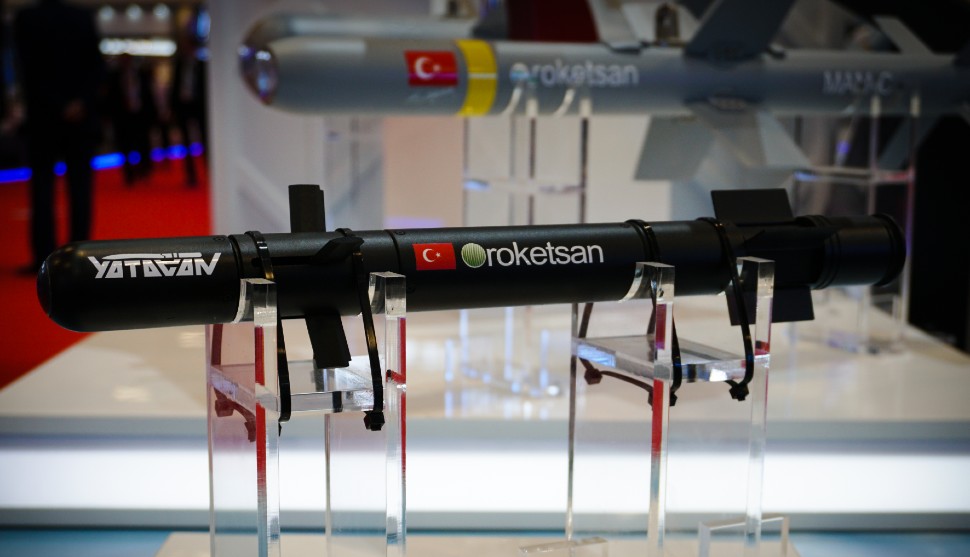 The Yatagan missile is 40cm (16in) long and weighs approximately 1kg (2.2lb), with a stated range of 0.54nm (1km). The weapon's development is being internally funded specifically for use during urban warfare operations, although warhead types have not been disclosed.

Roketsan has drawn on technologies already employed on its 22kg MAM-L and 6.5kg MAM-C munitions, already supplied to the Turkish armed forces and export customers. Its MAM-L weapon was displayed with Turkish Aerospace's Anka-S and twin-engined Aksungur UAVs at IDEF.

Meanwhile, Roketsan is continuing with the development of its SOM-J stand-off-range missile, which is optimised for internal carriage by the Lockheed Martin F-35. Despite ongoing uncertainty over whether Turkey will take delivery of the stealth fighter, due to a dispute with the USA, the company says integration work is ongoing with development partner Lockheed.

The 500kg SOM-J is going through qualification using a Lockheed F-16, with this work expected to be complete by next year. The turbojet-powered weapon will use an imaging infrared seeker for terminal guidance against land and naval targets, and features an in-flight retargeting capability when operations are conducted alongside airborne early warning aircraft.

Meanwhile, the Turkish air force is expected to soon take delivery of Roketsan's SOM-B2 missile for use with its F-16 and McDonnell Douglas F-4 fleets. This version of the weapon features a tandem penetrator warhead.