Russian authorities are hoping to improve the commercial potential of the Ilyushin Il-96 family after completing ‘hot and high’ tests with a Cuban-operated example of the type in Ecuador.

The tests involved one of the Il-96-300s, registered CU-T1251, delivered to Cuban flag-carrier Cubana de Aviación towards the end of last year.

More than ten flights were conducted by the aircraft between Havana and the high-altitude airports at Quito and Latacunga – located some 2,800m (9,190ft) above sea level.

The aircraft (pictured on Russian television below at the VASO plant in Voronezh at its roll-out ceremony) was equipped with Perm PS-90A engines. Perm was among the participants in the test, along with representatives from Ilyushin design bureau, the Interstate Aviation Committee, and Russian certification authorities. 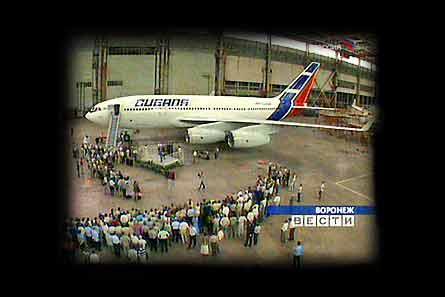 Perm says that, following the tests, the certification of the Il-96-300 will shortly be supplemented and that the results could, in the future, be “disseminated to the entire Il-96 family”.

It states: “This addition will considerably enlarge the operating conditions of the aircraft and will increase its commercial attractiveness.”