EasyJet grew its figure 11% to 16.5 million and remains Italy's third-largest carrier. Vueling's numbers narrowed very slightly, by 0.5%, to 5.87 million, but it is still the country's fourth-largest airline, followed by Lufthansa with 4.5 million.

The ENAC statistics show that Eurowings was the fastest-growing airline in the country last year, with passenger numbers rising 330%, from 354,000 to 1.53 million.

The Italian flag carrier remains the largest airline in the domestic market, carrying 12.2 million passengers during the year, while Ryanair carried 11.1 million and EasyJet 2.83 million.

Ryanair operates the "top" domestic route in Italy, between Rome Fiumicino and Catania, and the main international route, which is Rome Ciampino to Stansted, says ENAC, without disclosing figures for the routes.

Italy's largest EU route by passenger numbers was between Rome Fiumicino and Barcelona, with a figure of 1.22 million. Next is the route from the Italian capital to Amsterdam, with 1.11 million, and Madrid, with 1.09 million.

Six of the top 10 routes to EU states from Italy are operated from Rome Fiumicino. Milan Malpensa and Venice are also on the list. 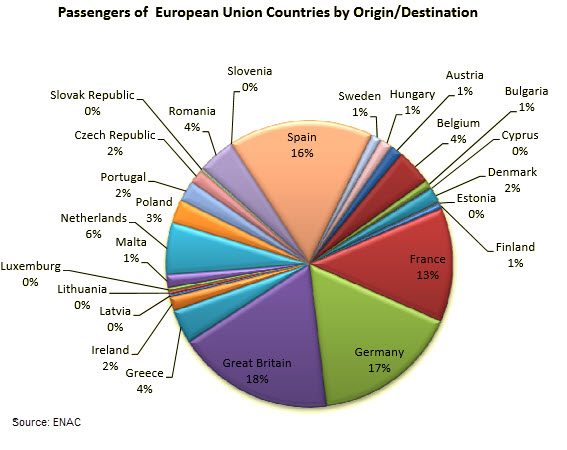 Total passenger numbers travelling to or within Italy grew 6.2% to 175 million. More than half of that number were carried by low-cost carriers.