Embraer will receive a “relevant and highly significant” transfer of technology package from Saab to support the Brazilian air force’s Gripen fighter purchase under an agreement signed on 14 April, says Jackson Schneider, president of Embraer Defense and Security.

The agreement concludes more than a year of negotiations since Brazil selected the Gripen NG fighter for the F-X2 contract in December 2013.

Embraer also will be actively involved in finalising the single-seat Gripen NG aircraft’s design and will develop with Saab the two-seat Gripen NG variant in Brazil.

A production line will be setup at Embraer’s Gavião Peixoto industrial facility, where the company currently assembles the KC-390, A-29 Super Tucano and Phenom 100/300 business jets. Embraer will be responsible for software development, integration, flight tests, final assembly and aircraft delivery in the Brazilian Gripen NG programme.

A new Center for the Development of Jet Aircraft Technology will also additionally be set up at this site with Saab and other programme partners. 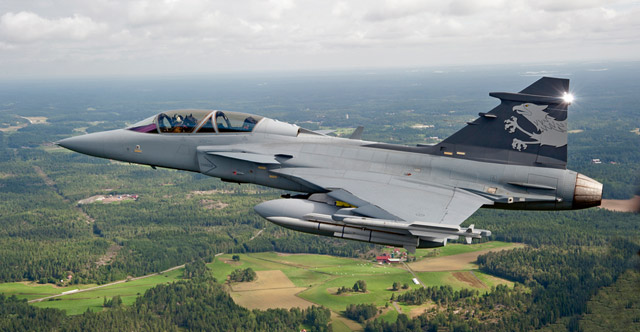 Both companies are discussing a business model to offer the Gripen NG to other countries and they are also open to discuss further cooperation opportunities beyond the Gripen programme.

Schneider notes that Brazil already has good sales relations in South America and in Africa and Saab has many contacts in Europe.

The current 36-aircraft order by FAB has been referred to as “the first tranche” of the Brazilian Gripen deal, confirming that both companies are working to expand the number of fighters ordered. Export deliveries are expected to happen after the 2023/24 time frame as soon as these “first tranche” Brazilian aircraft are delivered.

He concluded saying that this agreement would guarantee Brazil the control of new advanced technology. Hundreds of Embraer engineers and technicians will soon head to Sweden.

Later on 14 April a similar agreement was signed between Saab and the Brazilian aeronautical engineering services company Akaer. This company had previously received a loan from Saab and that loan was settled by giving Saab a 15% non-controlling stake in Akaer.