Potentially useful cockpit-voice recorder data was lost after a Transavia Boeing 737-800 crew opted to continue a flight just a few minutes after a serious incident involving an attempted taxiway take-off, according to Dutch investigators.

The aircraft had lined up with Amsterdam Schiphol’s taxiway D, rather than the parallel runway 18C, for a rolling departure to Chania on 6 September 2019.

Its crew aborted the take-off – having made the 80kt call-out – after an order from air traffic control.

According to the Dutch Safety Board the pilots discussed the occurrence after bringing the aircraft to a halt and judged that they were able to continue the flight.

While the carrier’s policy did not prescribe captain’s actions to be taken after an abnormal situation, he said he had twice attempted to contact the airline, unsuccessfully, for consultation.

Given that they considered the aircraft airworthy, both pilots assessed that they could continue the flight safely and sought clearance shortly afterwards for a departure from 18C, from where the jet subsequently took off without further incident. 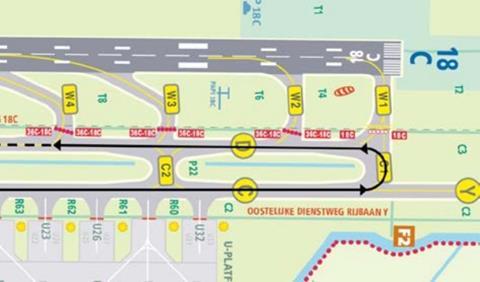 “The [pilots’] decision to continue the flight after the occurrence had several consequences regarding communication and the investigation process,” says the inquiry, adding that contact with the operator beforehand could have increased the understanding of the event and provided options for follow-up actions.

As the aircraft climbed away from Amsterdam the pilots discussed whether they needed to secure the cockpit-voice recorder data and consulted the operations manual.

But the manual’s wording over stopping the recorder left “room for individual interpretation”, says the safety board, and did not align with European regulations prescribing that recorders are not switched off during flight.

“The pilots stated that their interpretation of the occurrence was such that the [cockpit-voice] data had no added value compared to the…recorded conversations between air traffic control and the flight crew,” the inquiry says.

“This is a worrying statement. It is common knowledge that air traffic control data does not reveal communication between flight crew members.” 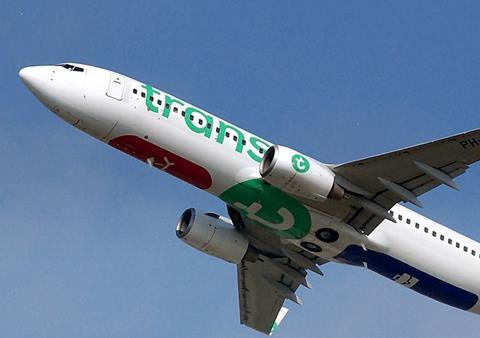 Continuation of the flight meant the cockpit-voice recorder, which had only a 2h duration, was overwritten and the conversations between the pilots during the incident were unavailable to investigators. The safety board says operators and crews should “do the utmost” to ensure recordings are preserved after a serious event.

The inquiry found the crew, travelling along taxiway C in early morning darkness, was “not fully aware” of their exact position, and an early take-off clearance introduced the risk of incorrect taxiing.

While intending to turn onto the parallel runway 18C the pilots instead turned onto taxiway D which ran between their taxiway and the runway.

Investigators state that taxiway centreline markings “did not provide continuous guidance”. Cues such as green centreline lights were not picked up by the crew, while signs indicating the nearby runway enhanced their perception that they were lined up correctly.

Transavia is part of Air France-KLM Group and its status as a base carrier at Schiphol led the runway controller to believe that the crew was familiar with the airport, and the inquiry says he shifted attention away from the 737 to deal with other traffic and did not observe the erroneous line-up.