Investigators have revealed that the first officer of an Air India Express Boeing 737-800 unsuccessfully tried to convince the captain to abort an unstable second approach to Kozhikode before the jet landed long in a tailwind and fatally overran.

The inquiry believes the captain was under “misplaced motivation” pressure to land at Kozhikode on 7 August last year because he had been rostered at the “last minute” to operate another flight the next day, and the airline – owing to “faulty” human resources planning – had too few captains available at the airport.

India’s aircraft accident investigation bureau states that this situation was exacerbated by a steep cockpit authority gradient. The captain had close to 11,000h total time against fewer than 2,000h for the first officer.

The captain was also experienced in operating to Kozhikode, with 36 flights to the airport in the previous year, which probably resulted in “overconfidence” and “complacency”, says the inquiry, while the first officer demonstrated a “meek and unassertive demeanour” in the captain’s presence. 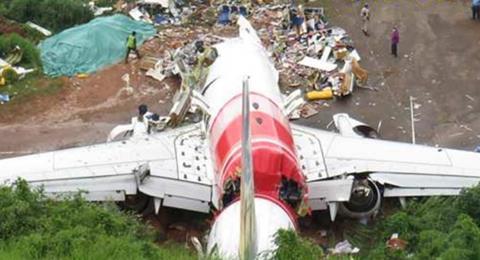 Twenty-one of the 190 occupants did not survive the accident

While carrying out the initial approach to the wet runway in rain – during which the captain’s windscreen wiper failed – the crew executed missed approach to runway 28, because the runway was not in sight at minimums.

As the first officer was looking to set the aircraft up for a second approach, an Air India flight departing for Delhi requested to take off from the opposite-direction runway 10 – even though the prevailing winds favoured runway 28.

Air traffic control asked the Air India Express pilots whether they would also like to use runway 10 for the arrival.

“Despite the unserviceable wiper on the captain’s side, [the crew] did not consider a diversion to an alternate airfield,” the inquiry says. After receiving weather information from air traffic control, including the wind direction, the crew accepted a runway 10 approach.

The pilots did not carry out a mandatory calculation of required landing distance, despite the wet runway and tailwind.

Cockpit-voice recorder information shows the captain had been apprehensive over the reliability of the windshield wiper, stating: “I hope it works.” Although the wiper appeared to start functioning, it operated at a slower speed than that selected.

The crew had often operated in Indian monsoon conditions, says the inquiry, but the captain opted to make the second approach to Kozhikode “without any risk assessment” even though the jet had sufficient fuel to divert to alternate airports in close proximity.

It says this amounted to a “gross violation” of standard operating procedures, but the first officer – confronted by the steep authority gradient – “did not give any input” about the situation. 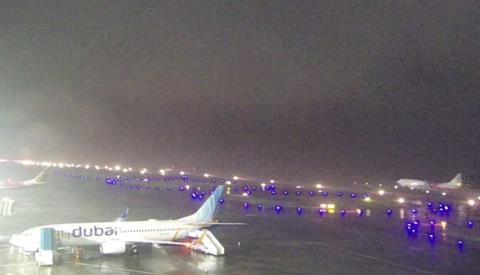 The aircraft captured the ILS glideslope at 2,200ft and was cleared for landing, but the captain delayed the flap selection until 1,700ft, opting eventually for ‘flap 30’ rather than ‘flap 40’ owing to turbulence.

“This [flap position] decision in itself was justified but the delayed flap approach was not correct,” the inquiry says. It also says the ‘flap 30’ landing was “at variance” with the airline’s standard procedures which recommended landing with ‘flap 40’ at Kozhikode, especially when the available landing distance was marginal.

The crew disengaged the autopilot at 500ft but not the autothrottle. The pitch attitude reduced and the 737’s descent rate started to increase, reaching up to 1,500ft/min.

Analysis shows the approach “soon became unstabilised”, says the inquiry, with the rate of descent and a deviation below the glideslope exceeding criteria. The ground-proximity warning system twice cautioned over the glideslope but while the captain increased pitch, momentarily slowing the descent, the rate subsequently began increasing again.

Application of manual thrust – counter to autothrottle commands – gradually reduced the sink rate but increased the airspeed, the engine thrust still rising even as the 737 floated at 20ft at a point nearly 1,400ft beyond the threshold.

Only when the aircraft was more than 3,000ft beyond the threshold – on a table-top runway 8,858ft in length – was the engine thrust reduced.

Cockpit-voice recordings show the first officer made a couple of attempts to draw the captain’s attention to the unstable approach and, at 4,200ft beyond the threshold, called for a go-around.

But this was not heeded by the captain. The first officer did not take over the controls and, as a result of the long float, the aircraft touched down at 4,438ft – halfway along the runway – at an airspeed of 150kt but a groundspeed of 165kt.

Reverse-thrust was commanded 3s later but the reversers were then stowed “before [they] could take any effect”, says the inquiry, only being deployed again 15s after touchdown. 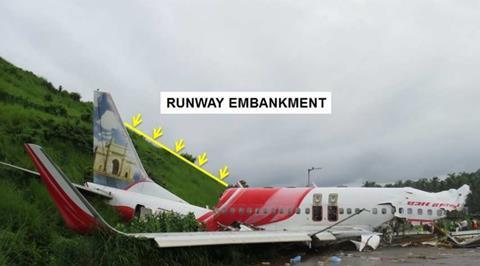 The captain was largely unresponsive during the landing roll, failing to acknowledge any of the standard calls from the first officer.

Unable to decelerate in time, the aircraft overran at 85kt, travelled through the runway-end safety area, and collided with the ILS antenna and a fence before falling 110ft down the table-top embankment and encountering the perimeter road.

Twenty-one of the 190 occupants, including both pilots, were fatally injured in the accident, while another 76 received serious injuries.

Alongside its immediate findings on the circumstances of the accident, the inquiry highlights the absence of a “detailed pro-active policy” and “clear-cut guidelines” by the Indian civil aviation regulator regarding monitoring of long landings which have been a “major factor” in runway-excursion events since 2010.