Qatar Airways has highlighted Airbus’s introduction of an alternative to expanded copper foil for lightning protection on the A350, but the airframer insists it is not a reaction to its skin-paint dispute with the carrier.

The airframer attributes paint cracking on the A350 to different thermal expansion rates of the aircraft’s composite fuselage skin, paint layers, and the expanded foil, but insists this does not amount to a safety matter.

Qatar Airways, however, has grounded several A350s in response to the skin-paint issue and the situation is the subject of a high-profile legal dispute.

In skeleton arguments presented at the High Court in London on 19 January, Qatar Airways referred to the airframer’s introduction of an alternative lightning protection layer – formed from perforated copper foil – in its manufacturing.

It claims Airbus has implemented “certain changes to the design” of the A350 which are directed at preventing the surface degradation from appearing on newer aircraft.

These include introducing perforated copper foil instead of expanded copper foil, to avoid thermal stress concentrations and insufficient resin adherence, and making other changes to window frames and fasteners.

“Full details of all design changes are relevant to [Qatar Airways’] claim for specific performance of the A350 contract, and any decision on [Qatar’s] part as to whether to accept future deliveries of [redesigned] A350s,” the carrier states. 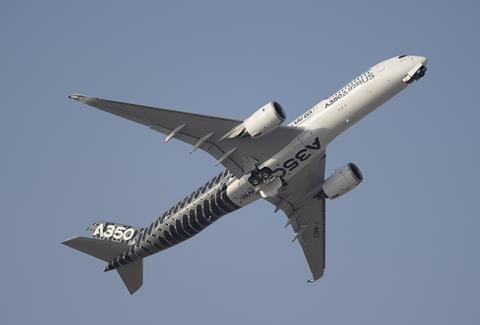 Airbus insists the use of perforated copper foil – used on parts of the aft fuselage, but not the wings, of aircraft delivered towards the end of last year – is unconnected to the Qatar dispute, but rather part of a weight-saving programme for the type.

The airframer filed a European patent on use of perforated copper foil for lightning protection in 2019, some two years before the Qatar grounding.

Expanded metallic foils have become an “industry standard”, the patent states, because they do not unravel and have a homogenous composition.

But such expanded foils have to be produced to tight tolerances to meet weight and conductivity requirements, and be able to withstand lightning strikes – perhaps with currents of 200,000A – in particularly susceptible zones on the aircraft.

Thinness is limited by the expansion process, says the patent. Use of perforated metallic foil, however, enables the production of thinner and lighter materials for integration with composite aircraft skin panels, with perforation apertures optimally spaced to achieve the required weight, strength and electrical performance.