Spanish investigators have detailed the poor airmanship by the crew of a Swiftair ATR 72-500 in the aftermath of a stall incident, as it proceeded to conduct an unstable approach and landing at Madrid.

Investigation authority CIAIAC found that the turboprop stalled after the crew pushed the aircraft beyond its climb limits in icing conditions, during a flight from Alicante on 9 September 2017.

After the pilots recovered from the stall they opted to proceed to Madrid and climb to 15,000ft – actions suggesting they considered the icing problem to have been resolved.

But as the aircraft descended towards Madrid the crew became aware of an unexplained vibration and, at about 12,000ft, declared an emergency to air traffic control.

Cockpit-voice recordings, which had been absent during the stall, returned during the descent and revealed conversations discussing the origin of the vibrations. The crew indicated they thought turbulence or a flap problem could be responsible.

Concern about the flaps led the captain – who had taken over from the first officer as flying pilot – to decide to conduct a flapless approach and landing. But he did not request execution of any checklists, nor did the first officer remind him.

“As a result, they were not performed,” says the inquiry.

When the first officer asked about the flaps in the event of a go-around, the captain responded: “Don’t even think of going around, we have to land.”

CIAIAC says the captain’s reply regarding a go-around, and failure to give the first officer any instructions, was “inappropriate” for a passenger transport flight, and showed an “obsession with landing at all costs”. 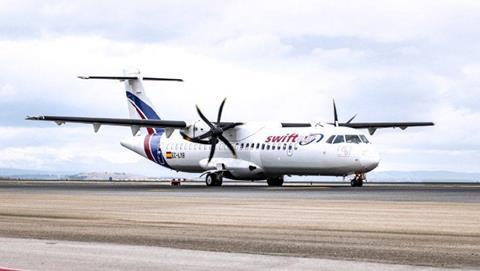 The captain also noticed something on the runway but “rejected” the first officer’s offer to inquire with air traffic control. Two marshalling vehicles undertaking a check were still occupying the runway at the time.

Even though the captain had insisted on avoiding a go-around, there was little evidence of efforts to stabilise the approach.

“A focus on landing is understandable in the sense of not wanting to prolong the flight, but it is precisely in order to achieve the landing that a stable and controlled approach should have been ensured,” says the inquiry.

The descent rate exceeded 1,000ft/min, the airspeed exceeded the target speed by more than 20kt, and the absence of completed checklists meant the captain had to remind the first officer that they needed to remember to lower the landing gear.

“Let’s not forget, OK?” he said, according to the inquiry, which points out that checklists are intended to ensure pilots do not have to resort to memory.

The captain instructed extension of the landing-gear at 840ft and 3nm from the runway, while the aircraft was flying at 204kt, despite the first officer’s warning that the speed was too high for deploying the undercarriage.

Only after cockpit alerts and further reminders from the first officer did the captain quickly reduce the speed, and the landing-gear was deployed at 539ft.

The descent rate was still 1,000ft/min at just 340ft and the cabin announcement to passengers to fasten their seat-belts was made at 216ft, only 23s before touchdown.

CIAIAC says the ground-proximity warning system sounded a sequence of five alerts owing to the ATR’s descending to a low height, without flaps, while travelling at high speed. These alerts “triggered no reaction”, the inquiry adds.

The aircraft touched down one-third of the way along runway 32R at Madrid’s Barajas airport, but the length of the runway meant the ATR was able to decelerate and stop without problems.

One of the 22 passengers required medical assistance and the first officer requested an ambulance as the aircraft taxied to its parking position.

CIAIAC has made multiple recommendations to Swiftair over the “deficiencies” in the way the flight and the stall were managed. These include ensuring crews have the required skills and knowledge covering several areas – among them flying in icing conditions, stall recovery, decision-making, crew resource management, and adherence to operating procedures.