Investigators probing the fatal Bek Air Fokker 100 accident at Almaty will be seeking to establish whether freezing conditions contributed to the aircraft’s failure to climb away during take-off.

Mist was present at the time, according to Almaty airport meteorological data, with the air temperature of minus 12C close to the dew point of minus 13C.

The commission of inquiry into the 27 December accident has yet to determine the take-off configuration of the aircraft and, crucially, whether it had required de-icing before the early morning flight.

Icing has previously been implicated in at least two fatal Fokker 100 take-off accidents in freezing conditions – including the loss of a Palair aircraft at Skopje in March 1993 and that of an Air France Regional jet at Pau in January 2007.

Neither crew detected the presence of ice contamination on the wings and neither requested that the aircraft be de-iced before departure.

Both the Palair and Air France jets had conducted take-off with an 8° flap setting. The flap setting on the Bek Air aircraft has not yet been disclosed.

The inquiry into the Palair accident stated that the lifting capability of the wing had been impaired above 10° angle-of-attack, whereas it would not normally have stalled below 16.5° with 8° of flap.

Its analysis drew attention to various issues including the risks of wing contamination arising from cold-soaking of fuel.

The Palair aircraft oscillated before banking steeply to the right, its wing striking the ground before the jet broke up, resulting in 83 fatalities among the 97 occupants. 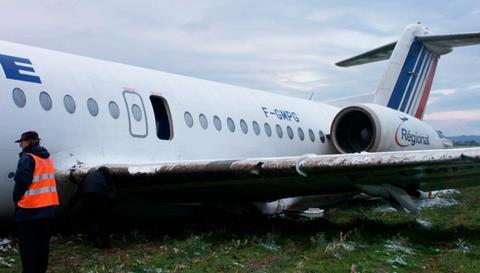 Although the Air France Fokker 100 also experienced severe oscillations as it lifted off, it stayed relatively intact as it contacted the ground. The only fatality was the driver of a truck which was hit by the jet as it crossed a road.

French investigation authority BEA, which probed the Air France accident, highlighted two other icing-related take-off accidents which occurred to Air Ontario and USAir Fokker F28 jets, the predecessor to the Fokker 100 and Fokker 70.

Concern over the vulnerability of Fokker 100s to icing conditions led the European Union Aviation Safety Agency, in early 2009, to mandate the installation of on-ground wing leading-edge heating systems on the type.

EASA stated in its directive that some aircraft had already been fitted with such a system following the Palair accident.

Among the aircraft delivered with the system installed, EASA’s directive noted, was MSN11496 – the airframe involved in the Bek Air accident at Almaty. The status of the system on the aircraft has not been clarified.