Canadian investigators believe one of the pilots of a modified Douglas DC-3 inadvertently moved the aircraft’s fuel-condition levers while raising the undercarriage, cutting off the fuel flow to both engines.

The North Star Air aircraft (C-FKGL) came down after take-off from Fort Hope airport in Ontario, while carrying out ferrying of diesel fuel to Pickle Lake, on 21 June last year.

After it became airborne the first officer, who was flying, called for the landing-gear to be retracted at about 200ft. The captain selected the gear-up lever but both engines simultaneously lost power and the crew force-landed the DC-3, in darkness, on the surface of Eabamet Lake.

Neither of the two pilots, the only occupants, was injured. The flight lasted just 50s.

Transportation Safety Board investigators conducted an acoustic analysis of the cockpit-voice recorder to ascertain whether the sounds captured during take-off differed from those on three earlier flights.

The inquiry found the sound traces from the three normal flights, and the accident flight, were similar and contained two clicks associated with movement of the landing-gear handle, followed by the signature of the retracting undercarriage.

But while the normal flights had no other acoustic events until the crew’s 400ft height call, the landing-gear operation of the accident flight was interrupted about 1s after it began, owing to a loss of hydraulic pressure – coinciding with two additional clicks and a rapid reduction in propeller speed – before the impact 17s later. 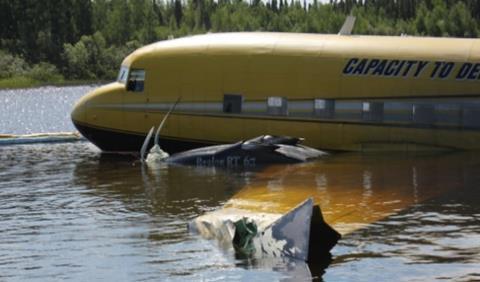 No propeller or power-lever adjustments had been made in any of the analysed flights before the loss of engine power, and the inquiry theorised that the unexpected clicks before the crash originated from the fuel-condition levers, on the same throttle quadrant, being “accidentally moved”.

It points out that the landing-gear control can present “ergonomic challenges” to the pilot. The handle is located behind, and to the left of, the right-hand pilot seat. To raise the landing-gear, the left-seat pilot would need to turn at the waist to reach for the handle with their right hand, and probably steady themselves by putting their left hand on the throttle quadrant.

Tests carried out by investigators found that the pilot’s hand could inadvertently move the fuel-condition levers, particularly if they were not secured in their gates.

“The gates are narrow and the fuel-condition levers are long, making it possible to snag or bump [them] out to the left and down,” says the inquiry.

Insufficient height meant the crew did not have time for any of the three options to relight the engines after the power loss.

Investigators are still probing a second North Star Air accident involving a modified TP67 version of the DC-3, nearly six months after the Eabamet Lake crash. The aircraft (C-FKAL) struck terrain about 500m south-west of runway 10 during approach to Sachigo Lake airport on 3 December. Neither pilot was injured.