Manchester airport in the UK is to modify a runway intersection after a second incident in which a business jet began its take-off roll lined up with the runway edge stripe rather than the centreline.

Detailing the 12 March 2019 incident, the UK Air Accidents Investigation Branch (AAIB) says that several features of the runway, combined with light and meteorological conditions, were responsible for the confusion. 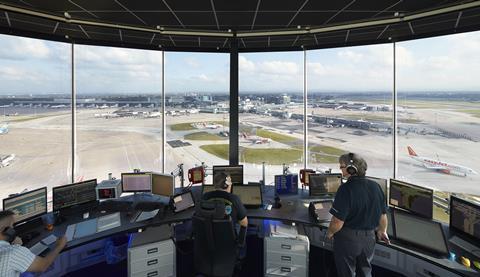 Prior to receiving departure clearance at around 15:05, the Embraer Phenom 300 (D-COLT) was held at intersection J1, which faces traffic on approach to runway 23R.

Although airport information charts note that the hold point is 200m (660ft) from the runway centerline, as the Phenom pilot taxied past the angled edge of the J intersection turning circle, “he perceived it to be the edge of the runway”, says the AAIB.

Although the Phenom pilot had departed from the airport on two previous occasions, he told the AAIB that he was more familiar with smaller airfields “with runway widths of less than 30m”, rather than Manchester’s total paved width of 91m – including widened shoulders of 23m on either side of the side-stripe markings.

The pilot “indicated that he was aware of the convex profile of Manchester’s runway 23R but the ‘picture’ of what he thought was the lit centreline in front of him, with 23m of paved surface to the side, seemed normal to him,” says the AAIB.

In addition, the low sun combined with a wet runway surface to further hamper the Phenom pilot’s ability to accurately perceive his position.

The pilot told the inquiry that he believed he was “distracted” by a request during line-up to perform a rolling take-off, with that also reducing “the opportunity to check his position”.

In the event, an air traffic controller noticed the mistake – confirming it via surface movement radar – and cancelled the departure clearance for the twinjet, fearing that the runway shoulder’s lower load-bearing strength could result in debris being thrown up.

In its analysis, the AAIB says the incident bears a strong similarity to an event in March 2018, when a Cessna Citation lined up on runway 23R via the J1 intersection and began its take-off roll “tracking the right runway side-stripe”.

Although the controller – coincidentally the same individual involved in the D-COLT incident – attempted to alert the Cessna’s crew, the use of an incorrect call-sign meant the business jet departed before any correction could be made, says the AAIB.

It notes that in the light of the two events “the airport authority is implementing several safety actions to assist pilots lining up at [the] J1 [intersection]”.

These include instating a “runway excursion” hotspot at the intersection, reconfiguring J1’s lead-on lights so that they will always illuminate when its stop-bar is lowered, and applying green paint to the areas of the turning circle outside of the runway edge lighting to give the impression of grass.