Investigators have revealed passengers on a Jazz Bombardier Dash 8-300 suffered injuries by opening and jumping from exits before any evacuation was ordered, after the turboprop was hit by a fuel truck at Toronto.

The inquiry into the accident, on 10 May last year, has highlighted passengers’ behaviour in the aftermath of the collision, pointing out that the crew originally intended a rapid deplanement rather than a full evacuation.

Transportation Safety Board of Canada says the aircraft had returned to Toronto after being unable to land at its destination, Sudbury, and was taxiing for gate 105 when its left forward fuselage was struck by the vehicle, which was travelling at 40km/h.

It spun the aircraft sharply through 120° to the right before the aft fuselage bounced off the rear of the truck. 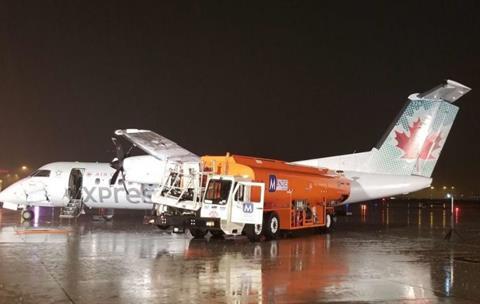 After the truck hit the Dash 8’s left side, the aircraft spun and its tail rebounded off the vehicle

Even though the propellers were still rotating, some passengers decided to “act on their own”, says the inquiry, and opened the two rear emergency exits without waiting for directions from the crew.

Four passengers jumped from the right-hand exit, two of them suffering injuries. All four jumped from the full 65in height, whereas the inquiry points out that the safety briefing card instructs passengers to sit first on the sill to reduce the distance.

“If passengers do not familiarise themselves with the briefing card for the specific aircraft on which they are travelling, they may not know how to operate and correctly use an emergency exit,” it states.

One passenger had unbuckled her seatbelt, despite being told by the flight attendant to keep it fastened, and was thrown to the floor, near the right-hand forward exit, by the collision – obstructing the attendant who needed to access the nearby window.

The pilots shut down the engines and instructed the flight attendant to begin a rapid deplanement.

But noise and exhaust had already entered the cabin from the rear exits – opened before any crew instructions – and the inquiry says this might have given passengers the impression of a fire or explosion risk, resulting in increased panic.

“Many passengers were ignoring the flight attendant’s instructions to remain seated and calm,” it states, with some gathering bags from overhead compartment. “Some were escalating the panic by yelling that they needed to get out of the aircraft.”

There was “increasing pressure” from the passengers including “verbal threats”, it says, and when the attendant opened the main forward left-hand exit she smelled fuel and decided to order a full evacuation.

Most passengers departed through the forward left-hand exit. But some either reboarded or attempted to reboard the aircraft, to retrieve belongings, during the evacuation.

Analysis shows the full evacuation, after the flight attendant’s order, took 2min 31s – exceeding the 90s required under certification standards. The last passenger exited 3min 38s after the collision and 3min 6s after the first had pre-emptively jumped from the rear exit.

Investigators found that the limited view from the fuel truck cab, combined with window condensation and the conditions of rainfall and darkness, meant the driver would not have seen the aircraft until 3s before the collision, and only if he had been leaning forward and looking to the right.

While the truck was repaired and returned to service, the aircraft (C-FJXZ) was written off in the accident.