The three-year project – being put out to tender by the European Union Aviation Safety Agency – will also gather evidence of their effects on cabin air quality, and develop an understanding of different contamination scenarios which might be observed during flight.

Quality of cabin air on commercial aircraft has been “at the core of a continuing debate” for six decades, says EASA. Investigators have probed multiple incidents suspected to have involved cabin air contamination.

“Although representing a small proportion of these types of events, contaminations by engine oils and their by-products are those that raise the utmost concerns,” states EASA.

“A number of investigations and research projects have been conducted by various scientific teams, involving in-flight measurements, but [have not obtained] the complete characterisation of the chemical compounds involved.” 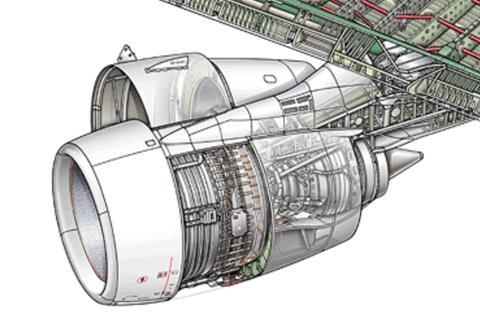 Bleed air from engines is a potential path for cabin contamination

The project will aim to perform toxicological risk assessment of the main identified chemical compounds using available data and through conducting specific tests.

It will also identify methods and tools for investigation of cabin-air contamination events, including techniques to collect samples from cabin surfaces and environmental control system components.

EASA says that, through comparison of the experimental data with that collected in similar schemes, the project will provide a “sound basis” to “build a comprehensive strategy” for performing complete health risk assessments during investigation of contamination events – as well as assisting development of aviation standards for environmental control systems.