Emirates A380 dipped below 400ft as crew mistakenly chased glideslope

Investigators have determined that an Emirates Airbus A380 descended far below the glideslope at Moscow Domodedovo after its crew entered a rapid descent, erroneously believing the jet was too high for the correct approach path.

It descended to 504ft above ground – with a rate of descent of 1,600ft/min – while still some 7.4nm from the threshold of runway 14R, in darkness, before the crew executed a go-around.

The A380 lost a further 109ft, dipping to just 395ft, before climbing away, the aircraft’s ground-proximity warning system having sounded ‘terrain’ and ‘pull up’ alerts.

Analysis from the United Arab Emirates’ General Civil Aviation Authority found that the aircraft had effectively been descending in pursuit of an imaginary glideslope after the crew’s instruments indicated the A380 was above the correct descent path.

This instrument reading had been false, because the aircraft was still outside of the zone of reliability for ILS signals and, as a result, was receiving noisy and inaccurate ILS data.

Despite the signal’s unreliability the first officer, who was flying, referred only to this glideslope deviation indication. The inquiry says he became “cognitively fixated” on the belief the aircraft was high, and opted to conduct a procedure to intercept the glideslope from above.

The first officer “did not confirm” the aircraft’s actual vertical position using other available sources, including the navigation display, approach chart, or pressure altitude indicator, says the inquiry. Had he done so, it adds, he would “most likely” not have carried out this intercept procedure.

While cockpit-voice recorder information was unavailable, having been overwritten during the return service to Dubai, investigators have reconstructed the sequence leading up to the incident. 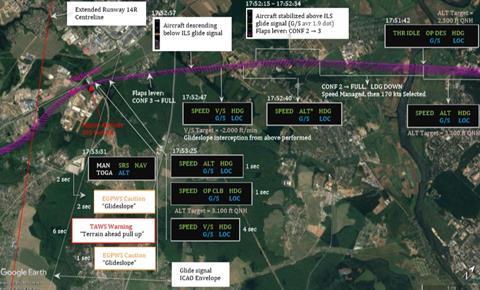 The aircraft had been north of Domodedovo, on a south-west heading and was due to join the AO14K arrival pattern which would have involved flying over the AMTAM waypoint on the base leg and turning left onto the approach to runway 14R.

But it was instead vectored along a parallel base leg which was some 2.9nm closer to the runway threshold.

At the time the aircraft was flying at 3,250ft and its crew was offered a descent to 2,230ft (500m QFE) to establish on the localiser. To reduce the A380’s altitude the crew switched to ‘open descent’ mode, which maintains idle thrust while maintaining a target speed – in this case 170kt – by adjusting pitch.

As the aircraft neared 2,300ft, the first officer commenced the procedure to intercept the glideslope from above – setting a 2000ft/min rate of descent – perceiving that the aircraft was high on the approach while just a few seconds from capturing the localiser.

But analysis of the situation has determined that the aircraft would have established on the localiser about 63s from the time the first officer commenced the procedure, and only if the aircraft had maintained its assigned altitude.

This meant the interception procedure, which requires the aircraft to be already established on the localiser, was premature. The aircraft was still on the base leg and 2.6nm from the extended runway centreline.

“In fact, the actual aircraft position was already below the 3° glideslope, and the aircraft would have established on the localiser far beyond his expectation.”

After initiating the interception procedure, the first officer focused on the A380’s heading to establish on the localiser course as well as its configuration for landing, without monitoring the correct glide capture.

“The displayed glideslope deviation crossed almost the full scale, from above to below, without engagement of the expected glideslope capture mode,” says the inquiry.

It adds that the captain’s role of monitoring pilot was not helped by the first officer’s having “improvised” the interception, and states: “No action by either flightcrew member took place to stop the aircraft from descending.”

As the A380 passed through 2,044ft pressure altitude, at 170kt, the radar controller ordered the crew to halt further descent, repeating the instruction three times and informing the pilots that the aircraft’s transponder was showing 290m when the runway elevation was 180m – a difference of 590ft. At about this time the crew commenced a go-around.

Investigators state that the crew also subsequently aborted a second approach before the aircraft landed on its third attempt. None of the 448 occupants of the aircraft (A6-EEZ), which was operating flight EK131 from Dubai on 10 September 2017, was injured during the incident.