Ethiopian 777-300ER returns to service after steering into Lagos mud

Ethiopian Airlines has returned a Boeing 777-300ER to service after an incident in which the aircraft partially left a taxiway after arriving at Lagos.

The aircraft (ET-ASL) had been operating a cargo flight having been temporarily converted to a freighter, says the carrier.

It had landed at Lagos as flight ET3905 from Addis Ababa on 2 June, vacating at the southern end of runway 18L.

While initial claims circulating on social media that the twinjet had overrun or veered off the runway, the airline says it “slightly skidded from the taxiway”.

Images from the scene show the aircraft’s left-hand main landing-gear embedded in mud. Meteorological data from the airport indicates no adverse weather conditions at the time.

Ethiopian Airlines says the aircraft was undamaged and subsequently returned to Addis Ababa. 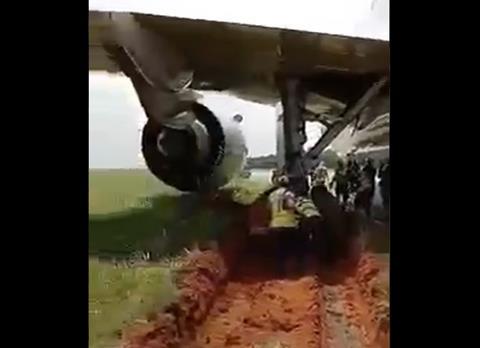