Spanish investigators have detailed an unusual incident in which a Boeing 737-500 crew struggled to control the aircraft after the autopilots failed, even though all the instruments needed to operate the flight remained fully functional.

Operated by Lithuanian carrier Klasjet, the aircraft had departed Madrid Barajas for Kaunas on 5 April last year, with the captain’s autopilot inoperative – a situation permitted under minimum equipment list regulations – but the first officer’s autopilot also failed some 2min after take-off.

Spanish investigation authority CIAIAC stresses that the loss of the autopilots “did not prevent proceeding with the flight in instrument conditions”, because all the instruments required to conduct the service “were available to the crew at all times”.

The inquiry also points out that the cockpit crew comprised instrument-rated pilots with “considerable” experience – a captain with over 4,300h on type, who also served as an instructor, while the first officer had about 2,000h.

CIAIAC found that, despite this, the pilots experienced “problems” operating the aircraft. Although the crew declared an emergency, they did not specify the difficulty.

Flight-data recorder information shows variations in altitude between 4,000ft and 5,000ft, shortly before the aircraft – which had departed runway 14L – started turning north, and the pitch began to vary, reaching attitudes as high as 11° nose-down.

The crew turned left to intercept Madrid’s runway 18L localiser but the inquiry says the turn was “too wide”. Unable to complete the intercept from the left, and with difficulties maintaining the correct altitude and position with respect to the localiser and glideslope, the crew carried out a go-around at about 3,300ft.

“The controller asked if they had problems with the speed, since he did not know the nature of their emergency, but the crew again requested vectors to land,” says the inquiry.

After the go-around the 737 headed east, then north. The inquiry states that the aircraft needed to increase altitude, as it was operating at 4,400ft and entering an area with a 6,700ft minimum. The controller observed that it was not doing so and twice ordered the crew to climb, but the pilots did not carry out this instruction.

The aircraft turned left, towards the west, while changing altitude “noticeably”, says the inquiry. It began climbing from around 5,000ft to reach nearly 5,800ft as it continued to turn to the south-west in preparation for a second approach.

It subsequently intercepted the localiser 11nm out at 4,300ft, but the pilots had not acquired visual contact with the runway at 8nm. “The crew was still having problems maintaining the ILS localiser and glideslope,” says the inquiry.

By the time the aircraft reached 2.5nm distance the controllers realised it had executed another go-around at around 2,600ft.

Having conducted to failed attempts at landing, the aircraft diverted to Getafe air base. It climbed to just over 7,860ft – its highest point during the whole flight – and then began to descend on a heading for runway 23.

While there were “minor variations” in speed and heading during this descent, the aircraft started to climb again while deviating to the right, according to the flight-data recording.

It entered a right-hand circle south of the runway, at altitudes between 6,688ft and 6,440ft, then proceeded to turn north for a right-hand downwind leg, before landing on runway 23 about 35min after its departure from Madrid. 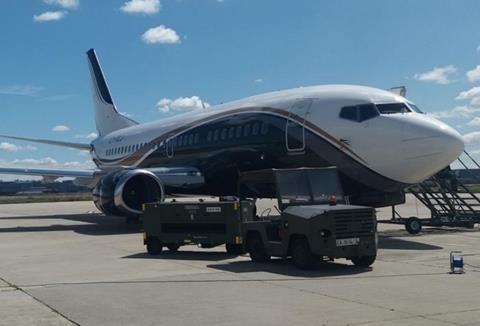 Cockpit-voice recordings of the incident were not captured

None of the 57 passengers and eight crew members was injured, and the aircraft (LY-KLJ) was undamaged.

Although the cockpit-voice recorder was retrieved and its data downloaded, it had not captured audio information about the flight. The inquiry has not been able to determine why.

But flight-data recorder information, it says, clearly shows the crew had “considerable problems maintaining the basic flight parameters”, including altitude, airspeed and heading, particularly during turns.

“The problems maintaining the basic flight parameters due to the absence of automatic control systems indicates that neither the decision-making nor the co-operation between the crew were adequate,” the inquiry says.

Poor weather conditions “complicated” the situation, it adds, with turbulence and cloud cover between 2,000-4,000ft around Madrid.

“This prevented the crew from making a safe visual approach, and they probably did not have the runway in sight,” it states. The aircraft was diverted not because the weather was better at Getafe but because air traffic control believed a third landing attempt would pose a safety risk and generate delays.

Klasjet carried out its own probe into the event, noting several aspects in its findings which the Spanish investigators might have addressed with safety recommendations. Given these findings, the inquiry does not believe any further recommendations are necessary.