The Federal Aviation Administration has published two new rules for drone operations that it says will increase safety in the fastest-growing sector of the aviation industry today. 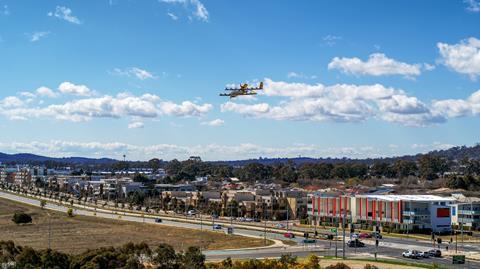 “The new rules make way for the further integration of drones into our airspace by addressing safety and security concerns,” says FAA administrator Steve Dickson. “They get us closer to the day when we will more routinely see drone operations such as the delivery of packages.”

The remote ID rule will require drones to broadcast a type of remote identification and location information without requiring them to be connected to the internet, increasing situational awareness for both operators and authorities, the FAA says.

“Remote ID provides identification of drones in flight as well as the location of their control stations, providing crucial information to our national security agencies and law enforcement partners, and other officials charged with ensuring public safety,” the FAA says. “Airspace awareness reduces the risk of drone interference with other aircraft and people and property on the ground.”

The rule, which is expected to go into effect in early 2021, allows drone manufacturers 18 months to produce aircraft with the remote ID capability. It allows operators one further year to begin using drones with remote ID.

The second rule governs where and under which conditions remote pilots can fly their aircraft. For the first time it grants blanket permission for FAA-certified drone pilots to overfly people and at night.

Under current so-called FAA Part 107 regulations, operators must have a specific individual waiver allowing them to conduct such flights.

Remote pilots must complete an updated knowledge test or recurrent online training in order to be considered qualified to conduct these flights, the FAA says. The drones will also be required to have anti-collision lights that can be seen for up to three statute miles (5km), and these must be operational.

The new regulations pave the way for delivery drone companies like Alphabet’s Wing, Amazon, Elroy Air and UPS to speed up development of their commercial drone delivery systems. Similar tests are ongoing in Switzerland and Japan.

The FAA says there are currently 203,000 certified remote UAS pilots in the United States, and 1.7 million registered drones, and that drone-flying is the fastest-growing segment of aviation today.