Nigerian investigators were unable to access information from either flight recorder of a Kabo Air Boeing 747-200 which touched down 100m short of the runway during a non-precision night landing at Sokoto.

The aircraft (5N-JRM) had been operating a Hajj charter flight from Kano to Jeddah on 4 October 2013, but was re-routed to Sokoto to pick up more passengers.

It already had 512 occupants, including 18 crew members, when it was cleared for an ILS approach to Sokoto’s runway 08.

But after the pilots reported the field in sight, they requested a straight-in visual approach to the opposite-direction runway 26 – even though this runway had no ILS, its approach lights were low-intensity and the visual-approach slope indicator system was unserviceable.

“The captain stated that the decision to land straight-in [on runway 26] was to save fuel,” says the Nigerian Accident Investigation Bureau.

Investigators were unable to access crucial flight and crew resource management information because the flight-data recorder’s magnetic tape was broken, while the cockpit-voice recorder data was found to be overwritten.

“Relevant data expected from both recorders were unavailable,” the inquiry says.

But it believes the 747 descended towards the runway in darkness initially on a 2.5° glideslope, with the captain intending to touch down at an “appropriate point” on the 6,400ft runway, given the aircraft was close to maximum landing weight.

The captain told the inquiry that he had observed an absence of touchdown zone lighting. According to the flight engineer, the approach was normal until a radio-altimeter call-out at 10ft, after which there was a “thudding sound and slight vibration”.

Examination of the aircraft after it parked showed two burst right-hand main landing-gear tyres. Investigators determined that the aircraft had struck the localiser antenna and approach lighting system, landed 100m short of the threshold, and continued rolling until it reached the runway.

None of those on board was injured. 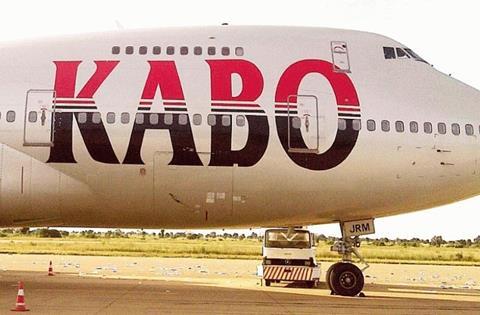 Although visual conditions prevailed, investigators point out that approaches to runways in darkness can lead to illusory phenomena, including ‘black hole’ approaches which can cause runways to appear out of position.

“Pilots need to rely less on outside references at night and more on flight and navigational instruments,” the inquiry says.

“Any time position in relation to the runway or altitude is in doubt, execute a go-around.”

The inquiry attributes the event to an “inappropriate” visual approach profile at night with no vertical guidance, following the decision to conduct the non-precision approach to runway 26.

Three days after the incident, the Nigerian Airspace Management Agency issued a NOTAM prohibiting the use of runway 26 at night when the approach lighting system of the runway became unserviceable.