Kenyan Fokker 50 flips over during landing in Somalia

All the occupants of a Kenyan-operated Fokker 50 turboprop have survived after the aircraft suffered a landing accident in Somalia.

The aircraft, operated by Nairobi-based Jubba Airways, came to rest inverted with its left wing separated during the accident at Mogadishu.

Jubba Airways says the accident occurred around 11:30 on 18 July. 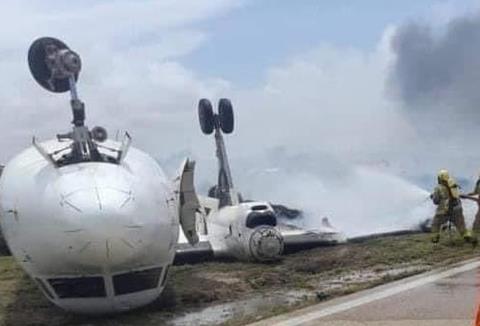 It has identified the aircraft involved as 5Y-JXN.

Cirium fleet data lists the Fokker 50 as having originally been delivered to Lufthansa CityLine in 1992.

It was operated by carriers including Air Nostrum and Denim Air, eventually being leased by Skyward International Aviation before being sub-leased to Jubba Airways.