One of African carrier Linhas Aereas de Mocambique’s Boeing 737-700s has suffered a runway excursion during landing at Quelimane airport.

LAM says the aircraft was operating the domestic flight TM1134 from Maputo on 26 February.

The aircraft involved (C9-BAR) came to rest on rough grassy ground after arriving from the capital at about 14:40, the airline adds.

LAM says the aircraft “ended up sliding, ending up at the end of the runway”. Images from the scene indicate passengers were disembarked using airstairs, and the airline says there were no casualties.

Meteorological data for the airport at the time of the incident indicates good visibility, with no significant adverse weather, although it suggests crosswinds from the west, and the presence of cumulonimbus cloud in the vicinity.

Cirium fleets data lists LAM as having two 737-700s in a fleet which also includes a pair of Embraer 190s. The aircraft involved in the incident, originally delivered to Aloha Airlines in 2004, was leased by LAM in 2019. 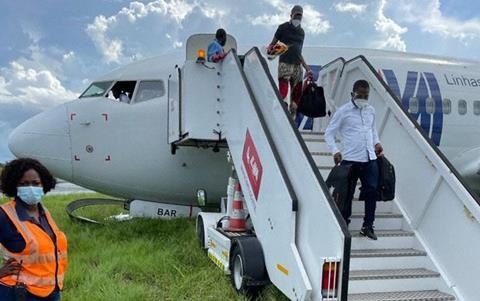