Search operations related to the Lion Air Boeing 737 Max 8 that crashed on 29 October are underway.

In a statement, state search and rescue agency Basarnas says it has deployed a team to locate the aircraft and its flight data and cockpit voice recorders. At the time of the accident, it says the 737 failed to make any emergency transmissions.

The search includes one helicopter, three ships, and dozens of search personnel.

The aircraft, PK-LQP, was operating as flight JT610 from Jakarta to Pangkal Pinang. All 189 aboard are believed to have died.

Based on the automatic dependent surveillance broadcast (ADS-B) data, the jet appears to have gone into a sharp dive 11 minutes after taking off from Jakarta's Soekarno-Hatta International airport at 06.20 local time before crashing into the sea, 11nm north of the town of Karawang.

In a series of Twitter posts, the country's national disaster mitigation agency spokesman Sutopo Purwo Nugroho says a small amount of debris has been found. Images on social media suggest that debris found so far include safety vests, as well as personal belongings. The absence of large sections of debris could suggest that the jet broke up upon impact. 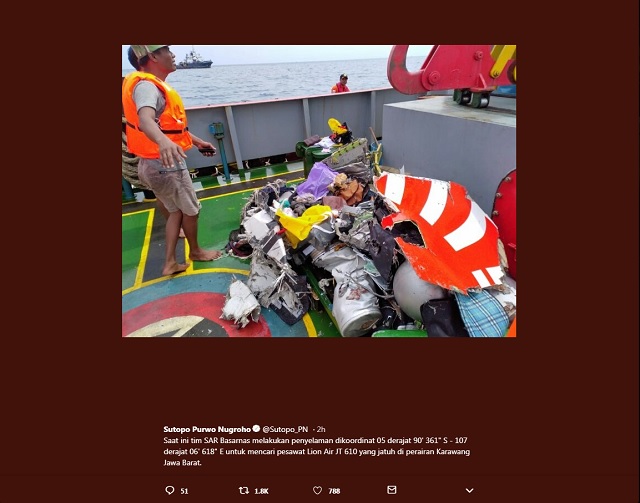 Lion Air states that the two pilots operating the flight had long flying experience. The captain had 6,000 flying hours and the co-pilot 5,000 hours. It says the aircraft was airworthy prior to the accident.

Flight Fleets Analyzer shows that the aircraft was delivered on 13 August 2018, and bears serial number 43000. It is equipped with 180 seats, and managed by CMIG Leasing.