Ukrainian investigators have determined that the crew of a Boeing MD-83 that veered off the runway at Kiev Zhulhany during a thunderstorm had chosen to continue an unstabilised approach, and failed to arm the aircraft’s spoilers before landing.

The Bravo Airlines twinjet (UR-CPR) was following an ILS approach to runway 08 in variable winds after arriving from Antalya on 14 June 2018.

Although it was still travelling at high speed, about 165kt, with a descent rate of 1,150ft/min when it passed 1,000ft, the cockpit-voice recording captured the first officer stating that the aircraft was “stabilised”. 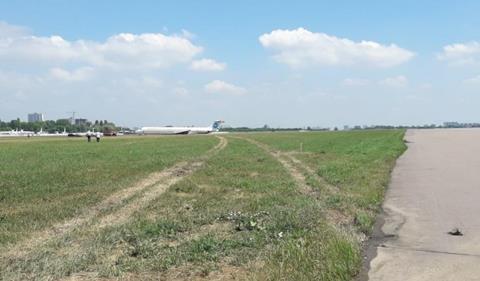 Investigation authority NBAAI says the crew should have commenced a go-around at this point, but instead proceeded with the landing.

Twenty seconds later the ground-proximity warning system issued a ‘sink rate’ alert because the descent had increased to 1,200ft/min. The MD-83 deviated below the glideslope and to the left of the runway axis.

It was still unstable at 200ft – when the crew received an automated ‘minimums’ call-out – flying with an airspeed of 168kt compared with the reference of 133kt, and situated 14m left of the axis.

Neither pilot mentioned conducting a go-around.

As the jet descended to 100ft its pitch gradually increased, and more thrust was applied. The aircraft landed at 161kt in the touchdown zone of runway 08, which was wet, about 7m to the left of the centreline.

Investigators state that the crew did not arm the spoilers, and they failed to deploy on touchdown. The pilots did not manually extend them, and the inquiry states that this rendered the brakes “ineffective”.

NBAAI adds that the crew’s actions in activating reverse-thrust were “incorrect”. It says reverse-thrust power should not have exceeded an engine pressure ratio of 1.3, given the state of the runway.

But the pilots increased this level to 1.9-2.1. The aircraft tended to yaw to the left, owing to previous rudder action during the touchdown, and the crew’s efforts to correct the deviation through differential braking were unsuccessful because of the spoilers’ absence.

The pilots lost control of the jet, which entered a skid to the left of the centreline.

Investigators state that correcting the course would have required releasing the brakes, and reducing reverse-thrust power.

But the aircraft instead veered off the runway’s left side, about 1,260m beyond the threshold, and travelled over rough ground, coming to rest 123m from the axis.

Although none of the 169 passengers and seven crew members suffered serious injuries, the MD-83 sustained severe damage.

Both main landing-gear assemblies collapsed, and the jet’s wings and control surfaces were damaged. Fuel leaked from the right wing and, while the engines remained intact, several other components were destroyed.