Investigators in Myanmar believe improper maintenance meant an Embraer 190’s intermittent nose-gear fault was not rectified before the aircraft landed at Mandalay without its nose-wheels deployed.

The Myanmar National Airlines jet (XY-AGQ) suffered substantial damage to its forward fuselage underside, nose-gear doors, avionics access hatch and other systems during the landing on Mandalay’s runway 17, as it arrived from Yangon on 12 May last year.

None of the 89 occupants was injured. 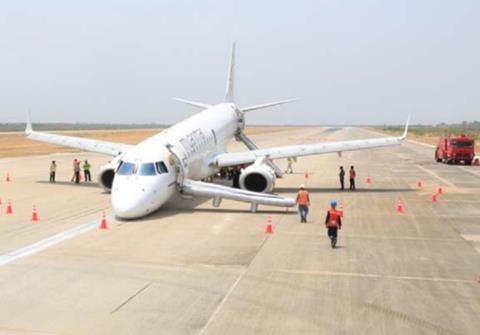 Analysis of flight-data recorder information showed that the weight-off-wheels sensors on the nose-gear and main landing-gear had correctly registered ‘true’ as the jet lifted off from Yangon.

But just after the command to retract the landing-gear, the nose-wheel switch signal changed back to ‘false’.

This indicates that the nose-gear shock absorber had compressed during the transit, enough to disengage a self-centring cam which normally keeps the nose-wheels from turning in the gear bay.

The Aircraft Accident Investigation Bureau of Myanmar says the nose-wheel slipped from its centred position and turned about 20°.

It remained in this offset for the rest of the flight. The inquiry points out that, if the nose-wheel rotates by more than 8° in the bay, it does not have sufficient clearance to emerge from the bay during landing-gear extension.

As a result, the nose-wheel became “physically stuck” when the crew attempted to lower the landing-gear on approach to Mandalay. 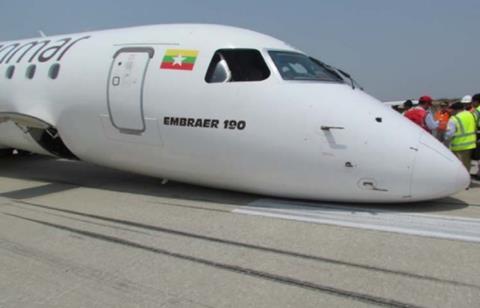 Analysis of flight-data recorder information revealed that, on 23 previous flights, the weight-off-wheels switch signal had similarly changed from ‘true’ to ‘false’ as the nose-gear retracted.

“While all these flights were operated uneventfully, the risk of the nose-gear tyre rotating beyond the limit and getting stuck in the wheel well was present,” the inquiry says.

It points out that the aircraft had previously undergone nose-gear servicing in an attempt to rectify a failure message relating to the weight-on-wheels system.

The failure message had appeared on 8 May, four days before the accident, as the jet operated the same Yangon-Mandalay route. It returned to Yangon and, after maintenance on the nose-gear sensors, was put back into service.

But during another flight, from Yangon to Sittwe on 11 May, the crew felt the nose-gear was “shaking” during the take-off roll and gear retraction, and further maintenance was performed overnight. The accident occurred on the first flight subsequent to the work. 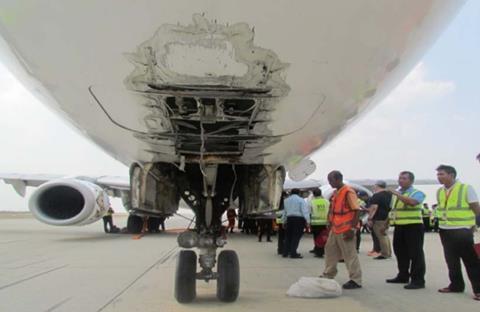 Investigators believe maintenance fault isolation work was “not properly done” and that “poor workmanship” had been carried out during nose-gear servicing.

“This event highlights the importance for maintenance crew to follow the maintenance and troubleshooting guidance from the aircraft manufacturer,” the inquiry says. “This will allow defects to be rectified as soon as possible, to eliminate potential flight safety consequences.”