Investigators have disclosed that a new Air Baltic Airbus A220-300 which diverted to Bordeaux on 12 February had suffered an engine failure.

While the details of the failure, in the left-hand Pratt & Whitney PW1500G powerplant, have yet to be disclosed, the incident follows a series of engine failures on the type involving Swiss aircraft.

The Air Baltic twinjet involved, YL-AAU, had only been delivered to the airline in early December – the aircraft was the 100th of the type to be produced and carried ceremonial markings.

French investigation authority BEA says the jet had been operating a service from Riga to Malaga when it diverted.

The aircraft had been close to entering Spanish airspace at the time of the incident, and landed at Bordeaux around 10:30.

Inspection regimes have also focused on engines which have accumulated relatively few cycles since installation of a particular engine-control software version. 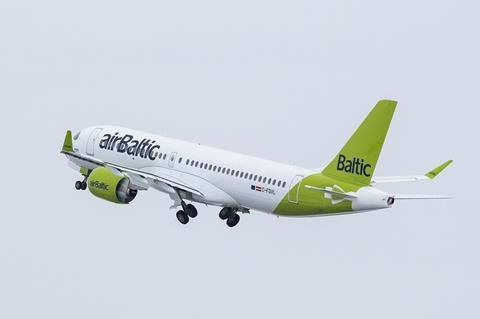 Air Baltic received YL-AAU, the 100th A220 produced, in December