Passengers of a Caspian Airlines Boeing 737-400 have evacuated the aircraft by slides after it suffered a landing-gear accident at Isfahan.

Passengers are seen exiting the 737 via evacuations slides on the forward exits.

Isfahan airport issued a 5 January NOTAM stating that its runway 07L/25R was closed as a result of the presence of a disabled aircraft.

Iran’s Civil Aviation Organisation has yet to clarify whether the landing-gear collapsed, or failed to extend before the aircraft touched down.

There is no verified information on the extent of damage to the jet.

But the Iranian news outlet ISNA cites the Isfahan airport spokesman as stating that 110 occupants safely left the aircraft, after flight 6904 arrived from Mashhad at 17:10.

It also states that, according to a crisis management chief of the province, some of them suffered minor injuries.

Originally delivered to Malaysia Airlines in 1992, the 30-year old 737 was first registered to Caspian Airlines in 2014, according to Cirium fleet data. 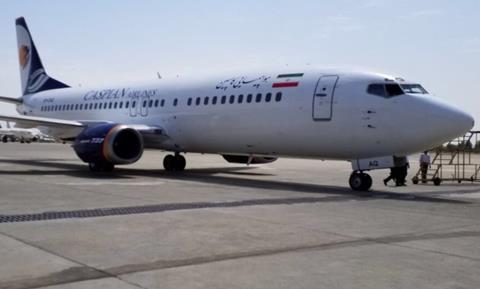 Caspian operates a small fleet of types including older-variant 737s