Investigators have recovered both recorders from the Aeromexico Connect Embraer 190 involved in an accident in Durango on 31 July.

It is not immediately clear what condition the cockpit voice recorder and flight data recorder are in, with Mexican civil aviation authority chief Luis Gerardo Fonseca Guzman cautioning that the subsequent investigation could be lengthy depending on the devices' condition.

Guzman, whose comments to Mexican media were shared by Mexico's transportation ministry on Twitter, was quoted as saying that the pilot of flight AM2431 is in stable condition and is assisting with investigations.

No one was killed in the accident, which took place shortly after the E190 departed Durango for Mexico City in poor weather. Video posted on social media that appeared to be filmed from inside the passenger cabin show the aircraft accelerating for take-off before impact. It is not immediately clear if the aircraft was ever airborne. Aerial photos show the aircraft wreckage resting in a field ahead of the runway. 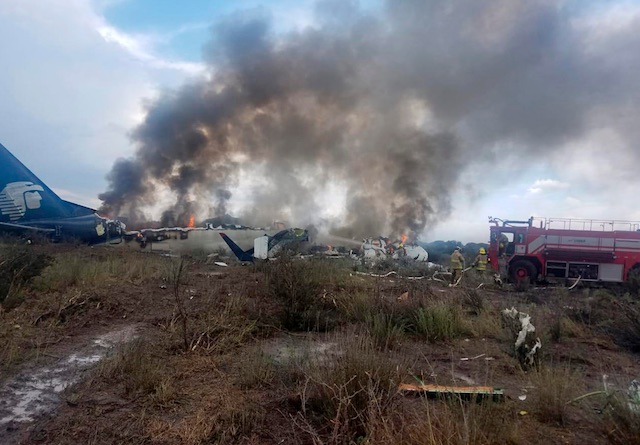 A total of 99 passengers, including two infants, and four crew members were on board the flight. Most of the passengers who sustained injuries have been discharged from the hospital, says the ministry.

The Mexican civil aviation authority is overseeing the investigation into the accident, with assistance from the US National Transportation Safety Board and Federal Aviation Administration, as well as Embraer.

Guzman says investigators will collect radar video and closed circuit camera footage from the airport, and will also look into weather conditions at the time of the accident. Despite the rainy weather, the airport was open at that time, notes Guzman.

The E190, registration XA-GAL, was built in 2008 and joined Aeromexico's regional fleet in 2014. Embraer says it has sent a team of technicians to Mexico.

Aeromexico, which says it deeply regrets the accident, credits the "prompt action of the crew and passengers" for the lack of fatalities.

"We are deeply saddened and moved by this incident, and we would like to reiterate, first of all, that the Grupo Aeromexico family extends its support, thoughts, and prayers to those affected and their families. We are doing everything in our power to assist them," says Aeromexico chief executive Andres Conesa.