African carrier RwandAir has disclosed that one of its aircraft has been involved in a runway excursion at Uganda’s Entebbe airport.

The Bombardier CRJ900 was operating flight WB464 from Kigali via Nairobi on 20 April.

RwandAir says the regional jet suffered the excursion, “veering off the runway upon landing” as it arrived in “adverse weather” at about 05:30.

“All customers and crew were evacuated safely and no injuries were reported,” the carrier adds.

The aircraft involved (9XR-WI) was delivered new to the carrier in 2012.

RwandAir says the situation is “under control” and that it is in contact with “all affected passengers”. 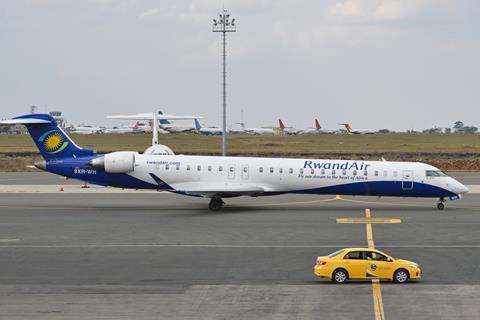 According to the airline, the CRJ900, similar to this one, suffered the excursion on landing

“The aircraft is currently being recovered so Entebbe’s runway can return to use,” it adds.

“Our flight crews are highly trained for all eventualities including flying in adverse weather conditions,” the carrier states.

It says it is assisting the Ugandan civil aviation authority with its investigation into the circumstances of the incident.

Meteorological data from the airport for the time of the event indicates thunderstorms and rain, with 21kt winds from the south-east.