Two KLM widebodies have been involved in a minor ground collision at Amsterdam Schiphol airport.

It specifies the relevant flight numbers as KL601 and KL623. FlightGlobal schedules data identifies the respective destinations as Los Angeles and Atlanta, and the originally-assigned aircraft as a Boeing 747-400 (PH-BFV) and 787-9 (PH-BHA).

There was "no further effect on scheduled flights", says Schiphol's operator, adding: "The cause will be investigated."

Flight Fleets Analyzer lists KLM as the manager of the 747, which is owned by a Bermudan entity named Minots Light. The 787, meanwhile, is leased from AerCap.

KLM confirms wing-tip damage and says both aircraft are "grounded for repair".

It stresses that "the safety of the passengers has not been compromised at any moment", and that rebookings were made so that passengers could "continue their journey as quickly as possible".

A passenger aboard the 747, identified as Lucas van Oostrum, has circulated a photo on social media which appears to show the jet's damaged starboard winglet, and another which indicates that the 787-9's horizontal stabiliser was involved in the collision. 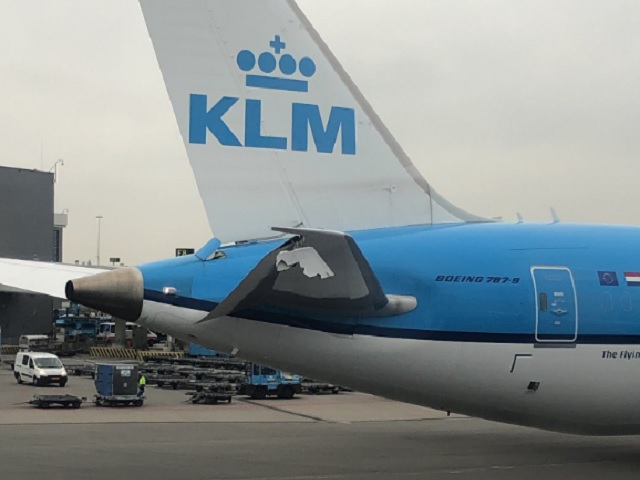