Thai A350 descended below 670ft while still far from Frankfurt runway

German investigators have detailed an approach incident in which a Thai Airways Airbus A350-900 descended to less than 670ft above ground while still nearly 6.5nm (12km) from touchdown at Frankfurt Main.

The aircraft (HS-THF) had been inbound from Phuket, at night but in good visibility, on 1 January.

While descending through 7,300ft, the crew was instructed to increase the descent rate. Approach control subsequently clearing the flight to 3,000ft and then to a heading of 040°, at 170kt (315km/h) or faster, to conduct the ILS approach to runway 07R. 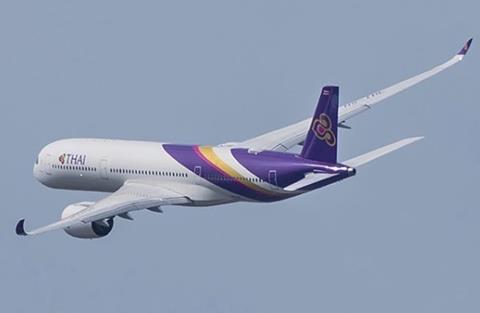 At nearly 6.5nm from the threshold the jet should have been at around 2,100ft

German investigation authority BFU states that the crew started extending flaps at 6,000ft and lowered the landing-gear at 5,100ft.

At this point the A350’s rate of descent was around 2,000ft/min, and the rate of descent “increased continuously” as the twinjet reached the 07R base leg and descended through 4,000ft. Flight-data recorder information indicates the descent rates reached 3,500ft/min.

An automatic 2,500ft altitude announcement sounded and the autopilot was disengaged at this point.

BFU indicates that, some 20s later, the cockpit-voice recorder picked up two ‘sink rate’ alerts and then an automated 1,000ft call-out and a glideslope warning.

The first officer, who was flying, ordered a go-around and the captain transmitted this decision to Frankfurt tower – the first radio contact the crew had made with tower controllers.

BFU says the aircraft had descended to 936ft altitude, the equivalent of 668ft above ground, while still 6.43nm from the runway threshold.

This is far below the 2,100ft above ground normally expected at this distance for an aircraft following a typical 3° glideslope.

BFU says the A350 subsequently carried out a second ILS approach to 07R. As it crossed the same minimum-height point of the previous approach, 6.43nm from the runway, the aircraft was at 2,238ft.

It touched down without further event about 14min after commencing the go-around.

Investigators have yet to publish conclusions on the circumstances of the incident.